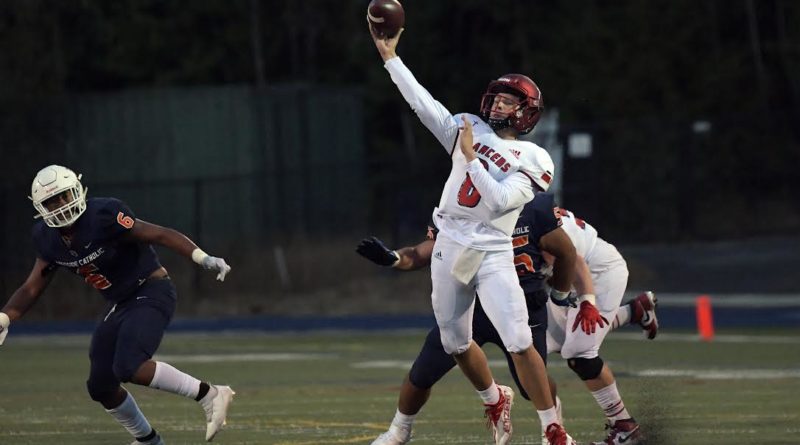 BURIEN – The temperatures were an unseasonable 80 degrees. The sun was out for the Kennedy Catholic Lancers homecoming game Saturday afternoon at Highline Memorial Field.

And the Lancers didn’t disappoint the crowd, pulling away late to record a 34-17 victory over Tahoma in both schools’ 4A North Puget Sound League opener.

“We’ve won every homecoming since we’ve been here – six years straight,” Kennedy Catholic coach Sheldon Cross said. “I think Kennedy has won homecoming for 50 straight years. It means a lot to play for the alumni and this crowd. I’m proud of our program.”

Here are five observations from the Kennedy Catholic-Tahoma game:

The Lancers had more than just a homecoming to play for against Tahoma. Earlier in the day, the community celebrated the life of former longtime coach Tom Merrill, who passed away back in May.

COVID-19 restrictions kept a service for Merrill from happening until this fall, and it took place the same day as the school’s homecoming game. He was the second coach in school history, compiling a 146-80 record over 23 seasons before his departure in 1995. Merrill passed away at the age of 86.

“This one, we took this one personal for the alumni, and for coach Merrill, who just had his funeral today here in town,” Cross said.

CHANGING OF THE GUARD

The victory to open league play allowed Kennedy Catholic to put some early-season toe-stubs behind it.

The Lancers graduated a ton of seniors after the pandemic-delayed and shortened spring season, which means they now are relying on some youth to get things rolling again.

The learning curve turned into non-league defeats against Eastside Catholic and O’Dea during the first two weeks of the season.

“We knew going into the season, those (opponents) are really legitimate,” Cross said. “As you can see, we’ve got some new characters. We graduated the all-time leading passer in Washington state history, and four Pac-12 receivers. No matter what you say, it’s a process. And we’re trusting the process.”

Alexander’s 27-yard run for a touchdown extended a 14-10 halftime lead to 20-10 for Kennedy with 3 minutes, 7 seconds left in the third quarter. It was the second of three times the Lancers responded to challenges from Tahoma by retaking a lead – or add to theirs.

Tahoma responded to Kennedy’s game-opening scoring drive with a 16-yard touchdown pass from Gavin Garcia to Cody Monaghan, tying this one at 7-7 with 10:34 left in the second quarter.

Alexander capped an 80-yard drive following that Tahoma score with a 5-yard touchdown run, and a 14-7 lead.

Early in the fourth quarter, the Bears closed again on Dylan Shipley’s 15-yard scoring reception from Garcia to make it 20-17 with 11:13 to go.

But Syph answered on the following possession, going 45 yards on a scoring pass from junior quarterback Mason Hayes for a 27-17 Lancers advantage with 9:43 remaining.

Syph’s touchdown catch was one of several plays where the Bears appeared to have Kennedy Catholic ball-carriers wrapped up, only to have the Lancers get away for even bigger plays.

“We work so hard on trying to improve our tackling,” Tahoma coach Tony Davis said. “Those 10-yard gains turn into 40-yard touchdowns, and it’s one of those momentum shifts.

“Definitely an area we have to work on this week.”

Tahoma, at least, has time to rebound – and make a playoff push.

“Our kids are down right now,” Davis said. “We’ve got Federal Way next Saturday. We need to get healthy, get rested, come back and have a good week of practice and play next Saturday.”

INJURIES COULD MAKE A DIFFERENCE

Tahoma suffered a setback on its first play of the second half when big running back Heath Riggs gained 12 yards and went down with what Davis said appeared to be an ankle injury. Riggs did not return.

Prior to the injury, the 235-pound junior had carried the ball nine times for 74 yards, and caught three passes out of the backfield for another 37 yards.

“We’ve got a bunch of ankles right now, lower body injuries,” Davis said. “That’s part of football. Somebody’s got to step up.”