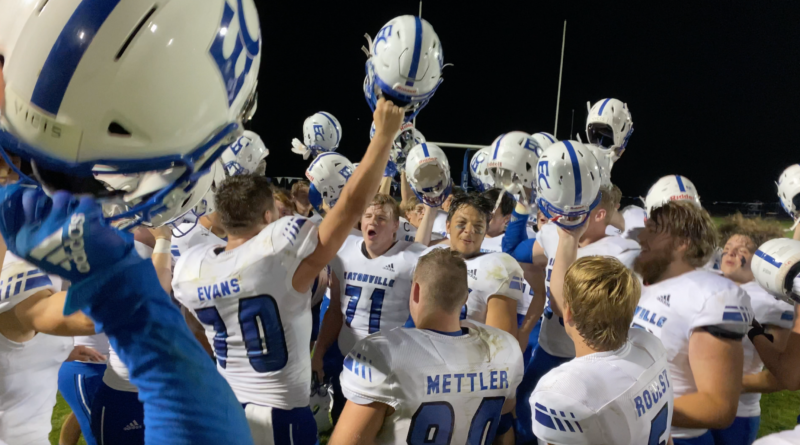 After trouncing through its first three games, the Cruisers (4-0) were challenged, and passed their first big test.

Now, the murmurs that have persisted since the preseason that this Cruisers team may have what it takes to knock No. 1 Royal off its years-long 1A pedestal has received some more validation.

But it was no cake walk. Eatonville withstood two nearly quarter-long La Center drives and an opposing offense that out-gained it 350 to 311 yards and rushed for 233 yards on the night.

“Biggest thing that is going to separate the top-tier teams in the state is how they’re going to respond to adversity when it hits, because it’s going to happen,” Kralik said. “I was proud of our kids from that standpoint.”

Sophomore running back Jalen Ward rushed for 127 of those yards on 27 carries for the Wildcats (2-2), who were within a touchdown and had the ball in the red zone at the end of the third quarter before Eatonville senior Blain Hanly’s momentum-quashing interception.

Before La Center could blink, the Cruisers were up 14-0.

First it was Austin Wickers exploding for a 64-yard touchdown run on the first play from scrimmage.

Senior linebacker Brody Chapman pounced on a fumble on the next possession to get the ball back. Then on the third play of the very next drive, it was Cruisers QB Kevin Wulff floating a pass into the hands of wideout Job Kralik for a 30-yard toe-tapping touchdown to go up two scores.

That’s when the Wildcats started to plug Ward up the middle and slink together its first slow, methodical drive, which ended with a touchdown pass from La Center QB Darren Cepeda to receiver Tru Feldman.

What makes this Eatonville team a state contender?

A blur of an offense. Depth atypical of a 1A school. Size that most 4A programs would gladly take.

Lambert called the Cruisers the “second best team we’ve ever played,” likening them to the Cade Otton-led 2015 Tumwater T-Birds and the 2017 Meridian team that beat La Center in the 1A state semifinals.

Led by tackle Kyle Cox, who is listed at 6-foot-6, 270 pounds, the Cruisers’ offensive line averages 270 pounds and does not start any linemen on both sides of the ball — a luxury seldom found at many high schools, let alone in Class 1A.

“I have one guy that big,” Lambert said. “They have four. And I’ll take some of their backups, too.”

Consider, too, that La Center’s offensive time of possession was greater simply because it couldn’t stop the Cruisers on offense. Eatonville punted once.

Why did La Center schedule Top 2 teams back-to-back? ‘That’s how you get better’

La Center’s drops to 2-2 with the loss, and likely out of SBLive’s Top 10 rankings, but the Wildcats walk away with a homework assignment: Study the weaknesses exposed by Eatonville and top-ranked 2B team Kalama and learn from them.

On Friday, the Wildcats were determined to draw out long, clock-chewing possessions — a similar tactic taken the previous week in a 32-26 loss to the Chinooks, in an effort to keep the ball out of Jackson Esary’s hands.

They were more effective against perhaps the top team in 1A, piecing together two separate drives that ate up nearly the entire second and third quarters. They deployed fourth down conversions and even tried an onside kick in the first half.

Despite the loss, he sees the way those two drives were executed— especially the second, which didn’t net any points but included two fourth down conversions and lasted the entire third quarter — on a learning curve.

“If you think about how much tie they had the ball in the second and third quarters, it wasn’t very much. That’s what we had to do. I was pleased with that.”

Ultimately, the Wildcats were done in by costly turnovers — two interceptions and a fumble.

“In order to beat a team like that, you have to play so clean,” Lambert said. “And we had those turnovers … kids were fighting, it wasn’t for lack of effort, that’s for sure.”

In Weeks 3 and 4, Lambert would gladly trade the losses for what the Wildcats learned about themselves in two losses to state contenders, and added his 2019 team that was upset by lower-seeded Connell in the opening round could have used a similarly challenging nonleague game.

“If we don’t play these teams, we’re not as good come playoff time,” he said.

Similarly, the Cruisers felt La Center was a worthy test. Stopping the Wildcats’ slow-rolling offense proved to be a test of mental fortitude to not be worn down on each play, Cruisers defenders said.

“They were close to delay of games constantly,” Hanly said. “They were trying to run out the clock like we were expecting. They made it really tough for us to have the ball in our hands.”

He might not have same accolades as Eatonville great Caden Jumper, now a tight end at University of Washington, nor does he have the recruiting pedigree of junior O-lineman Kyle Cox.

But the 5-foot-9, 190-pound Hanly was showered with praise by teammates in the huddle after the game and in postgame interviews.

Hanly ran in two touchdowns and contorted his body to intercept Wildcats’ QB Darren Cepeda in the red zone as the third quarter clock expired to put an end to a potentially game-tying drive.

After his interception, Eatonville scored twice more to pull away.

“Blain is by far, since his freshman year, one of the most clutch people on defense and he’s by far the most hard-working person in the weight room,” Job Kralik said. “He’s just a leader. He’s not the biggest guy, or the fastest guy, but he has a ton of heart.”

Hanly, a first team all-2A SPSL linebacker in the spring, led Eatonville in tackles both his sophomore and junior seasons. He has a penchant for making timely plays, which is why his interception didn’t ultimately surprise teammates and coaches.

“It was an adrenaline rush,” Hanly said. “I felt that’s what we needed.”