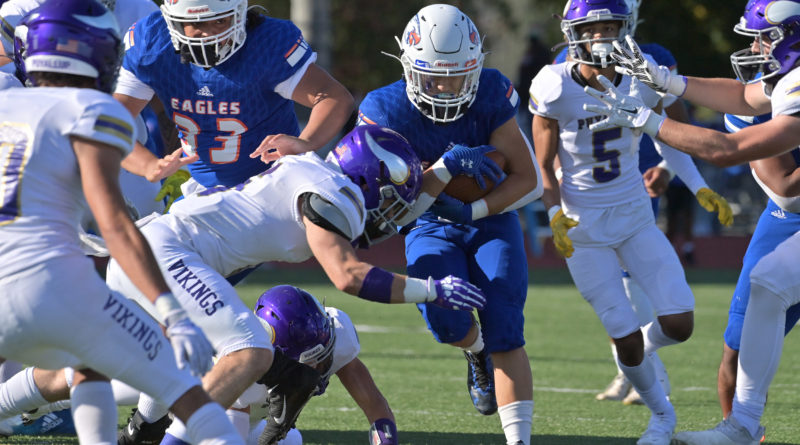 Each week, SBLive ranks the top 25 teams across the state of Washington regardless of classification. Here’s a look at how those teams fared in games played in Week 4 of the high school football season.

Class 4A favorites flexed their muscle in big way, blow by blow, at the line of scrimmage in convincing Art Crate triumph of 4A SPSL rival.

3A’s newest No. 1 team exploded for three touchdowns in a 41/2-minute span late in the first quarter, and rolled to a 3A KingCo win.

It was just a few short months ago that the coming-of-age Panthers were toasts of the Metro League. Being favored sucks sometimes.

Not punching it in from the Abes’ 1 in the final minute of the first half took a lot of the steam out of the reigning 3A PCL champions.

First, it was QB Bo Carlson, then RBs Peyton Wing and Eric Buck with rushing touchdowns, all in first 14 minutes, and rout was on.

CB Erick Mora nabs pair of interceptions in final two minutes of the first half – both leading to touchdowns as Lions’ defense shines.

One of the most surprising results of the fall, the Grizzlies were whooped in every facet – and coach Shane Keck ain’t making excuses for it.

It is a team with lots of talented pieces, led by WR Jordan Dwyer, but Vikings still trying to find itself in time to make usual late-season noise.

Stifled in a 4A KingCo cooker, Wolves finally made go-ahead score – Parker Barrysmith’s touchdown pass to Griffin Miller in third quarter – hold up.

Even if it doesn’t pick up steam right out of the station, the Payton Hoyt Express (99 rushing yards, four TDs) always gets going for Thunderbirds.

Make no mistake, this one was personal after spring-season loss. Coach Dom Daste alluded to it. And Crusaders played like rematch meant something.

After two late successful onside kick recoveries, Wildcats got what they wanted in the end – a shot at a long field goal by Ethan Moczulsk to win it.

As good as the Slot-T rushing attack was, the most impressive part of the Tomahawks’ triumph was the defense’s line-of-scrimmage domination.

Wildcats rallied from 27-13 deficit with eight minutes. to go, block a last-second Skyline field goal – and win it on QB Avery Walker’s sneak in overtime.

What more do you need to see from QB Luke Abshire? Threw for 291 yards and three touchdowns in leading the Bears to a big rivalry victory.

For second consecutive week, one of Idaho’s top programs has to come from behind in the second half – this time feasting off two interceptions.

Going across the border, the Bombers’ offense had one thing in mind – throw deep. QB Cameron Kitchens did – for 280 yards and five touchdowns.