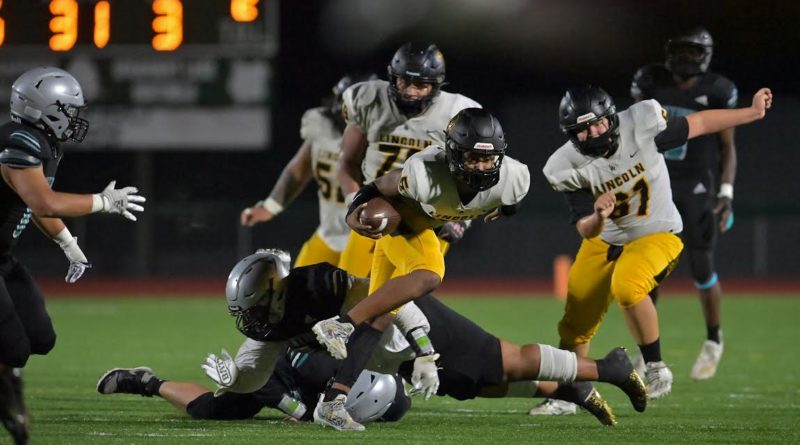 SPANAWAY – Chatter of “revenge” certainly grew louder as the game wore on – and the score more lopsided.

Lincoln of Tacoma made sure to restore a little order in the wacky 3A Pierce County League by upending No. 4 Spanaway Lake, 41-14, on Thursday night at Art Crate Field.

Junior quarterback Gabarri Johnson continued his torrid dual-threat pace with 271 passing yards on 13 of 21 completions. He also rushed for 74 yards on 11 carries. He accounted for five touchdowns.

“It was on me to play my game and do what I do,” Johnson said. “There was nothing more to it.”

This was a stark contrast to Johnson’s performance last spring in his first varsity start with two early turnovers (and also a pair of special-teams miscues) as the Sentinels posted a 34-7 victory at Lincoln Bowl.

The rematch Thursday was a different story altogether.

After Johnson tossed an 8-yard touchdown pass to Khaleel Robinson with 5:28 remaining in the first half to give the Abes a 21-6 lead, Spanaway Lake drove down the field, and faced a fourth-and-goal situation from the Lincoln 1-yard line.

But quarterback Dempsy James was stood up in the middle of the Abes’ defensive front for a 1-yard loss, and the Sentinels were turned away empty with 1:26 to go before halftime.

And Lincoln put the game away with a pair of touchdown in a four-minute span at the end of the third quarter.

Aaron Jimenenz’s 1-yard touchdown run pushed the lead to 28-6. And then, Johnson found Robinson – his older cousin – alone along the left sideline for the pair’s third touchdown connection on a 68-yard strike, and the Abes were up big – 34-6 – with 50.1 seconds remaining in the third quarter.

The win was certainly a big boost after the Abes dropped road games at Yelm (34-18) and Bellevue (56-35). They did beat Skyline in their only home game.