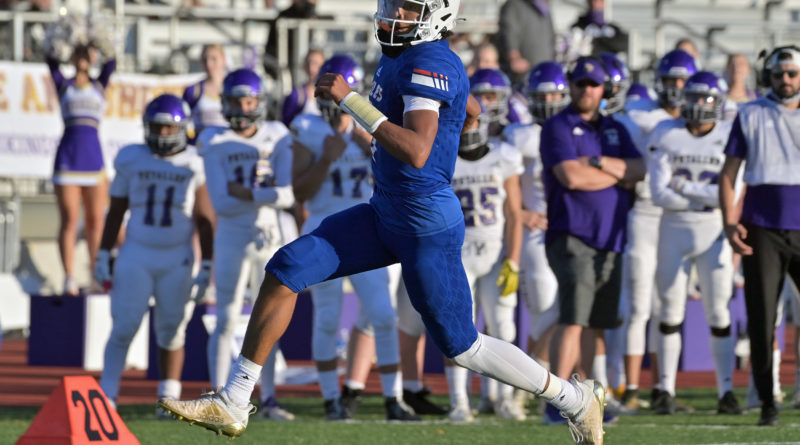 SPANAWAY – The top-ranked Graham-Kapowsin Eagles know other Class 4A state-championship hopefuls are looking for any sign.

Any weakness at all.

And the Eagles aren’t showing any.

Under a bigger spotlight statewide with a Thursday showdown with 4A SPSL rival Puyallup, Graham-Kapowsin thoroughly dominated from start to finish, posting a 34-3 victory at Art Crate Field.

Quarterback Joshua Wood accounted for five total touchdowns, including four scores through the air, as the Eagles racked up 420 yards of offense.

Their defense wasn’t too shabby, either, holding the No. 9 Vikings to just 88 yards, sacking Micah Balzarini four times and forcing a fumble.

Graham-Kapowsin has not given up a touchdown in four consecutive games to start the season.

“I thought it was a great test,” Graham-Kapowsin coach Eric Kurle said. “They are coached well. They’ve got great athletes. They are tough up front.

Here are four observations from the Graham-Kapowsin-Puyallup game:

The lifeline of the Graham-Kapowsin defense is its line.

It has college-bound players everywhere, starting and coming off the bench.

And on Thursday, the Eagles showed a wrinkle Puyallup was not expecting – switching to a three-man front.

“We thought we could handle them … so we could put an extra guy out to stop the pass,” Kurle said. “And it also allows our six guys who are powerful – three of them can go hard, then the other three can go in the next series and do the same.”

Balzarini was sacked three times in the first two series. One of his passes was batted down at the line of scrimmage. And an everlasting tone was set.

In the third quarter, newcomer Andrew Savaiinaea recorded the fourth sack, stripping Balzarini of the football – and recovering it for a turnover, setting up the Eagles’ final touchdown.

“They have a talented front,” Puyallup coach Brian Grout said.

WHEN YOUR OFFENSE HAS THE ‘JUICE,’ IT IS UNSTOPPABLE

Julian “Juice” Mason did his best to hide his disappointment in the mention that he wasn’t his team’s leading wide receiver coming into the game Thursday.

That statistic did not hold up three hours later as Mason – an Idaho State University commit – was the focal point of the pass offense, hauling in seven receptions for 60 yards and the game’s first touchdown on a 4-yard corner connection at the 4:07 mark of the first quarter.

“I am a team-first guy,” Mason said. “When they put two guys on me, I will tell them, ‘Run your routes 100 percent.’ And those dudes are making the most of their opportunities.”

So, the emotional Mason, who was an all-4A SPSL first-teamer last spring, never gets in his quarterback’s ear if he is not seeing enough action?

“Sometimes he does,” said Wood, flashing a grin. “I’ll just tell him, ‘Next play, I’ve got you.’ And I go right back to him on the next play.”

Even though Savaiinaea was part of his program in 2018, then transferred to two different schools, he wasn’t sure how his homecoming to the Eagles would go down.

If Mason is the team’s No. 1 option in crucial situations, Savaiinaea is not far down the pecking order at tight end.

He caught five passes, including two big ones in the second half.

On fourth and goal from the Vikings’ 4, Wood called Savaiinaea’s number. He faked the handoff, wound up and rifled a pass to his big 6-foot-4, 270-pound target in the back of the end zone for a touchdown.

“We were going over that one all week,” Wood said. “I told him to go to the back of the end zone, and I will throw it up to him.”

Surprisingly, on Graham Kapowsin’s final drive, the Eagles opted to go for it on fourth and 4 from their own 27-yard line. Wood went right back to Savaiinaea, who hauled in a 7-yard pass along the Puyallup sideline for a first down.

The Eagles bled the final 7:49 of the game on that drive.

“It is a huge comfort that he trusts me like that,” Savaiinaea said. “Off the field, we have such a close bond. And on the field, it is like back to where we left off (a few years ago).”

PUYALLUP HAS SOME GROUND TO MAKE UP

With back-to-back losses to Sumner and the Eagles, the Vikings are now 2-2 in the tough 4A SPSL.

Grout is seeing gradual progress, even if it isn’t leading to a string of victories.

For the most part, Balzarini took care of the ball. Slot receiver Dane Parker made a couple of fantastic catches. Donte Grant’s role continues to expand beyond just being a fly-sweep speedster.

And on defense, safety Wyatt Gordon continues to fly around and and make plays around the line of scrimmage.

But Grout wants to see more consistency – on both sides.

“We wanted to control some clock – and control tempo. But we’ve got to get more stops and create more stops,” Grout said.

“We had some glimpses of some good things, but there was not enough consistency.”

HOW FOR REAL ARE THE EAGLES A MONTH IN?

The offense has three productive running backs – and Wood in the ground game as well. The quarterback completed 18 of 23 passes for 147 yards, and rushed for 58 yards on eight carries.

The Vikings did snap the Eagles’ season-long scoreless streak with a field goal at the 3:01 mark of the second quarter. But they have now not given up a touchdown in 16 quarters.

Punting? Well, there is always a slight weakness somewhere …

Which the Eagles did to near-perfection Thursday.