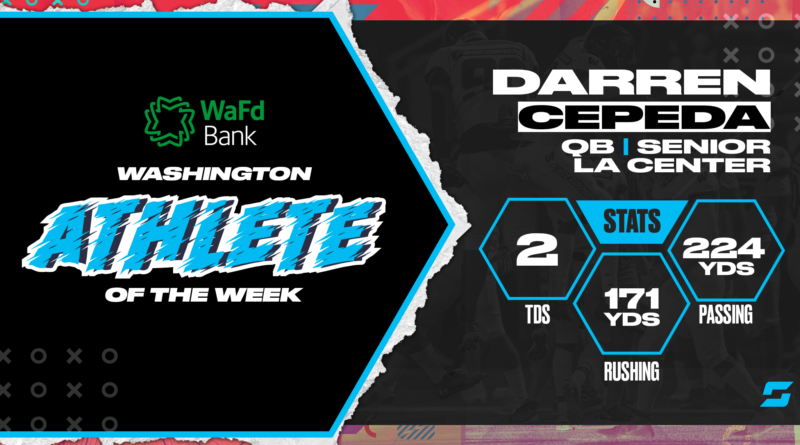 The senior tossed for 224 yards and ran for another 171 and two total touchdowns in a 52-21 thrashing of Woodland, per The Columbian.

Cepeda received 48.56% of the vote, beating out O’Dea’s Georgios Kotsakis who finished second with 35.69%. Sehome’s Tommy Funk finished third with 5.06% and R.A. Long’s Payne Plaster finished fourth with 4.13%. There were over 89,000 votes tallied this week!

Crabtree scored four goals to lead King’s to a 5-1 win over Nathan Hale on Sept. 7.

Melanie Torres, a freshman, scored two goals to lift the Puyallup girls soccer team to a 3-1 win over Skyline on Sept. 9.

Rushed for 316 yards and five touchdowns in a 49-14 win over Stanwood.

Accounted for five total touchdowns in a momentous win over Onalaska, a battle between highly ranked Central 2B schools.

Rushed for 216 yards and three touchdowns in 35-21 win over district rival Mountain View.

Hauled in two of the Raiders’ six interceptions in a 35-12 win over Interlake.

Turned 22 carries into a 139 rushing yards and a touchdown in a 17-0 win over Anacortes, reports Whatcom Preps.

Accounted for 112 rushing yards and three total touchdowns in a 38-7 win over formidable 1A rival Zillah, per The Yakima Herald Republic.

Competed 10 of 12 pass attempts on his way to a six-touchdown, 274-yard passing performance in Meridian’s 55-6 win over Evergreen of Seattle, per Whatcom Preps.

Didn’t make the start, but came in and threw 66, 87 and 56-yard touchdown passes to help the Wildcats to a comeback 27-17 win over Fife, per The Everett Herald.

The junior had a career night, accruing 570 total yards of offense. He completed 18 of 23 pass attempts for 372 yards and four touchdowns and rushed for 198 yards and another three touchdowns in a 54-42 shootout win over Skyline.

Tossed for 361 yards and six touchdowns opposite one interception, completing 17 of 29 passes in a 35-19 win over Monroe.

Rushed for 152 yards and two touchdowns to move Ferris to 2-0 under first-year head coach Malik Roberson.

Lumberjacks QB accounted for three touchdowns and took the game’s final kneel to help win the program’s first game in more than two years — a 21-20 nail-biter over Franklin Pierce. (TDN’s Josh Kirshenbaum has the story)

What a start to the season. Nobach completed 15 of 20 passes for 251 yards and six touchdowns in a 54-0 win over Oak Harbor.

Ran for 189 yards and three touchdowns with scoring runs of 53 and 36 yards and completed both pass attempts for 105 yards and two more scores in the air inn a 63-34 win over Muckleshoot Tribal, per The Chronicle of Centralia.

Backup QB tossed for 324 yards and four touchdowns in a 28-0 road win at Cheney.

Completed 31 off 52 passes for a 337-yard, five passing touchdown, one interception performance in a 38-7 win over Zillah, per The Yakima Herald Republic.

Khaleel Robinson, Lincoln of Tacoma (3A)

Lincoln’s offense caught fire in a 54-42 win over Skyline, and the slot receiver was a big part of it, catching seven passes for 234 receiving yards and four touchdowns.

The sophomore rushed for 187 yards and a touchdown in Gonzaga Prep’s 44-6 win over Eastmont. (READ MORE)

Logged 179 rushing yards and three touchdowns on 23 carries in a 50-16 win over Mark Morris.

Completed 15 of 22 passed for 253 passing yards and three touchdowns and tacked on 66 rushing yards with another two touchdowns in a 56-27 win over Bishop Blanchet.

Caught four passes for 126 yards receiving and a 42-yard how-did-he-do-it touchdown reception, as well as a lockdown night at corner in a 46-24 win Chiawana.

Tallied 260 total yards and three touchdowns in a comeback 43-20 win over Lynden Christian, per The Everett Herald.

Rushed 13 times for 156 yards in a shutout 28-0 Greater Spokane League win over Cheney, reports The Spokesman-Review.

It was quite the day for M-P’s rushing attack. Velasquez went for 128 yards and two touchdowns on six carries, per The Everett Herald.

Accounted for 221 total yards and three touchdowns in a 54-42 loss to Skyline, which included 165 rushing yards and 56 yards receiving.

Set a school record with 222 receiving yards, including three long catches for touchdown in a 28-7 win over Class 2A Pullman.

McGill went 14-for-19, 213 yards and 2 touchdowns in one half and a drive in North Creek’s game against River Ridge in week 2.