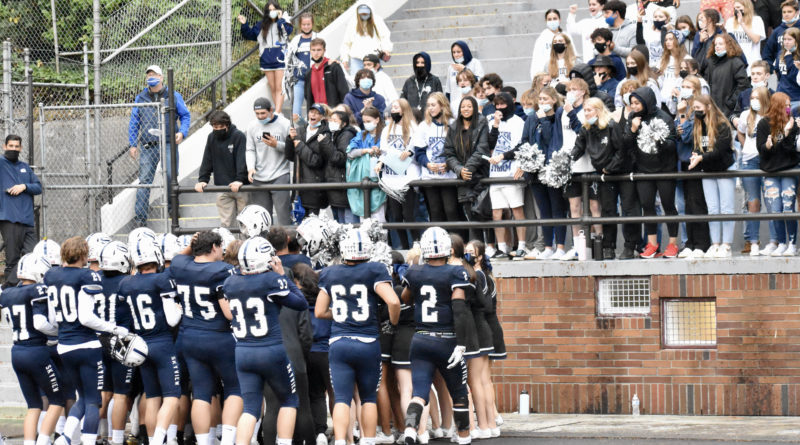 VANCOUVER, Wash. — A bout of thunder, lightning and heavy rain may have delayed the back-and-forth nonleague showdown at Kiggins Bowl late in the second quarter on Saturday.

But play ultimately resumed, and it was Jaydin Knapp’s 48-yard go-ahead touchdown run with four minutes left that lifted the Storm — of Skyview, that is — to a 38-35 win over visiting Sunnyside that saw seven lead changes and plenty of late-game drama.

Though Myles Newhouse’s rushing performance didn’t keep pace with his blistering first two weeks, the Sunnyside (2-1) back scored three times — a six-yard run, a 16-yard pass and a go-ahead one-yard run with seven minutes left as Sunnyside flipped a two-score deficit in the second half.

Five of the game’s seven lead changes may have occurred in the first half, but the game’s most dramatic moments came in the fourth quarter.

After Newhouse’s final touchdown gave the Grizzlies a 35-31 lead, Skyview thwarted its own efforts to strike back on the next drive.

Several penalties backed the Storm into its own territory. Facing 3rd and 21, Arriola heave downfield was picked off by Sunnyside DB Brent Maldonado, who then fumbled the ball. Skyview’s Tanner Beaman recovered for a first down just across midfield to bail out the gaffe.

Moments later, Knapp burst free up the middle for the go-ahead touchdown.

After referees broke up an on-field skirmish between the two teams on the ensuing kickoff, Sunnyside had four minutes to score, but the Storm clinched the game on a defensive stand and assumed victory formation.

Against imposing run defense, Sunnyside took to the air

Lobbestael saw facing Skyview’s size in the trenches as a necessary test to clear before beginning 4A Columbia Basin Big 9 play.

It meant the Grizzlies couldn’t rely on running back Myles Newhouse, who has approached 500 total yards rushing in the first two weeks.

“We’re mostly undersized against our league,” he said. “We (need to) overcome that on a weekly basis.”

It did so by airing out the ball, and found success even amid the torrential downpour that sustained through the first half.

Senior QB Logan Rodriguez completed 22 of his 32 passes for 325 yards, three touchdowns and an interception. He connected on TD passes of 79 yards (to Noah McNair), 32 yards (to Maldanado) and 16 (to Newhouse).

“I thought we had a good day offensively,” Lobbestael said. “They stayed in a similar defense until the end and I think our guys did a good job with it.”

The players, teary-eyed in a hard-fought defeat, didn’t want to hear it in the moments after the loss, but Lobbestael is confident the game will harden his team for league play.

The Grizzlies jump right back into Big 9 play with five straight league games beginning with a Week 4 home tilt against West Valley (Yakima),

The 4A Greater St. Helens League has been somewhat of a windsock for forecasting 4A state champions, producing three of the last four (Camas in 2016 and 2019; Union in 2018).

In the spring, the league title race ended unceremoniously in a three-way draw, with no wiggle room in the COVID-condensed schedule for a tiebreaker.

Absent from that stretch is Skyview, which hasn’t won an outright league title since 2011 and has never won a state title, but has reach the playoffs 10 of the last 12 times with 4A state semifinal appearances in 2008 and 2016 and a state runner-up finish in 2011 under coach Steve Kizer.

The Storm, which brought back more pieces from the spring than any team in the 4A GSHL, may have already started league play when they thrashed Battle Ground in Week 2, and and don’t see Union or Camas — their final two league opponents —until Week 7 and 8.

But Union lost its opening week starting QB Dom Colletto for the season with a broken arm in Week 2. And Camas is off to an 0-3 start playing a gauntlet of Oregon powers.

Consider that we don’t yet know how good Sunnyside is, though the same, admittedly, can be said about Skyview, or most teams three weeks into the season.

But the Grizzlies are off to a strong start. As is Skyview, though it will be the first to tell you it has plenty to work on.

In its league title picture, the Storm are the most unscathed of the bunch through three weeks, which puts them right on track with their preseason goals of a 4A GSHL crown and playoff run.

“I know we’ve got a team,” Knapp said. “These guys have got amazing heart. I love all of them. Every single one of them. We’ve been working since spring .. I know we can make it far this year.”

Newhouse showed he is much more than a hard-hitting safety in the spring when he logged more than 500 rushing yards and 300 yards receiving in a short five-game season.

As a senior, he’s had one of the more productive starts to the season statewide. Even if his running abilities weren’t relied on as heavily in a 22-carry, nearly 50-yard rushing performance against Skyview on Saturday.

The 6-foot, 205-pound power back weathered more than 30 carries per game through weeks one and two, tallying 492 yards and five touchdowns in wins over Prosser and Hermiston.

More importantly, he proved he can handle the heavy load.

“We usually don’t have guys like that, it’s,” Lobbestael said. “It’s taken getting used to from my end.”

Newhouse came into the program and immediately contributed as a running back, but Lobbestael was more excited about his future as a strong safety. Colleges like Montana Tech, where he holds an offer, like Newhouse on defense, mainly because most of his available film is at safety his sophomore season.