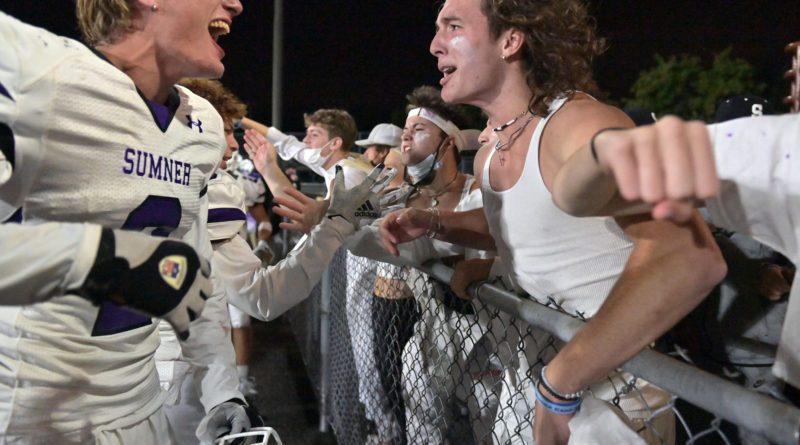 PUYALLUP – Before either team could start thinking about taking on the powerhouse from the plains of Pierce County – No. 1 Graham-Kapowsin – for a 4A SPSL title, the battle for the “Valley Championship” had to happen first under a downpour Friday night.

And it came down to the final play.

When it was done, fourth-ranked Sumner heartily celebrated a 26-21 victory over No. 6 Puyallup at Sparks Stadium.

Reigning 4A SPSL player of the year Peyton Wing scored the game-winning touchdown on a 23-yard touchdown run with 3 minutes, 25 seconds remaining – and Sumner’s defense held the Vikings to four consecutive incomplete passes from the Spartans’ 22 in the final seconds.

The last play, Puyallup quarterback Micah Balzarini – under heavy pressure rolling to his left – threw a fourth-down pass to the back of the end zone as time expired that was swatted away by defensive back Jay Mentink.

Sumner ended its four-game losing streak against the Vikings – and now sets up a mid-October showdown with the Eagles that could determine the league championship. Puyallup plays Graham-Kapowsin next Thursday.

“It is a game of inches,” Wing said. “Those were two legit teams going at it. It was who is mentally tougher the whole game.”

Here are four observations from the Sumner-Puyallup game:

SOMETIMES WHEN TWO ELITE TEAMS GET TOGETHER … IT AIN’T PRETTY

In the sternest of tests, both teams made plays – and failed miserably.

Puyallup committed three turnovers, including a bobbled punt snap deep in its own territory, and had numerous penalties that set itself up in down-and-long-distance situations.

The Spartans had two turnovers, missed a pair of field goals – and got just 28 points out of their 10 drives into Vikings’ territory.

Sumner finished with 305 total yards; the Vikings had 287.

Both coaches – Sumner’s Keith Ross and Puyallup’s Brian Grout – lamented execution issues, but also conceded that is what happens sometimes when two great teams play each other.

“All credit to Sumner, that is a good football team,” Grout said. “We just didn’t do enough to come out on top. Our kids know we’ve got to screw it in a little bit on the execution portion.”

NO MARSHMALLOW-LIKE MIDDLE IN EITHER DEFENSE

It was pretty obvious that the first order of business for both defenses Friday night – slow down the opposing inside rushing attack.

And that is what happened: Wing was limited to a hard-earned 82 yards for Sumner – with 23 coming on his final scoring scamper. And the normally-productive Vikings’ duo of Ziere Ford (47 rushing yards) and Ryan Cramer (8 yards on nine carries) were largely held in check.

In fact, Puyallup’s most effective rusher was star baseball player Donte Grant, who totaled 47 yards on fly-sweep runs – including the game’s longest gain of 31 yards in the third quarter.

The signature moments for both teams’ interior defense came on fourth-and-short snuffs in the third quarter.

At midfield, the Vikings went for it on fourth and 1 – and Ford was met head on the backfield by Sumner’s Eric Buck.

Sumner faced the same situation on its next series from the Vikings’ 40. University of Oregon commit David Iuli charged through from his defensive tackle spot and blew up Wing for a 2-yard loss.

“They are big up front, and we knew it,” Ross said. “We thought we could run our inside zone, but they were stuffing it.”

YOU CAN ONLY KEEP A LEAGUE MVP DOWN SO LONG

A determined Wing, who was held to 1 yard or fewer on five of his 16 carries, just kept chipping away at the Puyallup defense.

“That is a legit team,” he said of the Vikings.

But in the end, Wing came on out top.

In recent weeks, Sumner had installed a few more outside zone runs plays – and dialed one up for the senior on third and 4 – with the Spartans trailing 21-20.

He saw the hole open up on the left side, split two defenders and grabbed a little Spartans’ glory with a game-winning score.

Ross watched as Wing picked up the first down … then broke a tackle … then finished off the run in style.

“He is money,” Ross said. “That is a warrior. That is a Spartan warrior.”

After the game, Ross – a former linebacker at Central Washington University who has orchestrated one of the best defenses over the long haul in Washington high school football – cracked a joke about having that unit on the field to end the game.

“I am always thinking, as a (defensive) guy, I always want my ‘D’ in that position to win the game,” Ross said.

It is OK, coach – your defense came through.

When asked what the priority was on the final play with six seconds remaining, Wing didn’t hide the game plan.

The Spartans did just that, forcing a rushed Balzarini to find another receiver working to his left, and then throwing against his body for the end zone.

With two Sumner defensive backs in the vicinity, Mentink rose up and knocked the pass away.

“We tried to get a look in the middle of the field,” Grout said. “We liked the shot (pass) we got right before that (on third down) … but they doubled Jordan, and we were trying to get something off of that. It didn’t happen.”