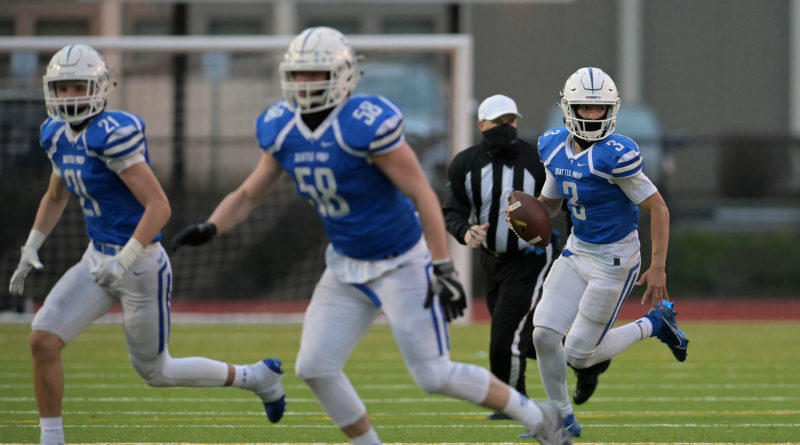 SEATTLE – For three quarters of Friday’s football game between Seattle Prep (No. 2 in 3A) and Mount Baker (No. 3 in 1A), the Panthers appeared to be in control.

The Panthers, who improved to 3-0 this season, held a three-touchdown lead late in the third quarter before a furious rally by the Mountaineers came up short in what turned out to be a thrilling 28-22 non-league victory at Memorial Stadium.

This game was a late addition to both teams’ schedule due to COVID-19 cancellations.

Here are three observations from the Seattle Prep-Mount Baker game:

Though the Panthers held that big lead late in the third quarter, the game never really felt out of reach for the Mountaineers, thanks to a few key turnovers, but more importantly their control of time of possession and meticulous approach on offense.

The Mountaineers have just 29 players listed on their varsity roster, which is likely a big reason for their efforts to control the clock.

“I have a tremendous amount of respect for the brand of football that those guys play and we knew it was going to be a dogfight,” Seattle Prep coach Aaron Maul said. “Their numbers are small, but every single one of those guys is a competitor and their coaching staff does a great job getting them prepared, so we knew we were going to get everything we could handle tonight.”

Statistically speaking, it wasn’t the best game of senior quarterback Braeden Smith’s career. He finished for 215 yards, two touchdowns and two interceptions, but he made the biggest play of the game when it mattered the most.

Midway through the fourth quarter, Mount Baker had scored and added a two-point conversion to cut the deficit to 21-15. And the Panthers were facing a third-and-23 from their own 27-yard-line.

But Smith found sophomore Drew Velling for a 73-yard touchdown bomb to extend Seattle Prep’s lead to 28-15. The Panthers would withstand another Mount Baker score for the six-point win.

“We have to be disciplined and play the kind of football that we want to with him being the one who facilitates and distributes and leads us,” Maul said. “That’s where he’s at his best and we just have to put him in the position to be who he is. He’s a talented, gifted young man and we want to make sure that we’re doing everything we can so that those gifts can shine.”

SMITH CONNECTING WITH … HIMSELF?

In something you don’t see every day, one of Smith completions went to a very unlikely target – himself. In the second half, a Smith passed was tipped at the line of scrimmage and floated about 20 feet into the air. Of the 22 players on the field, it appeared only Smith knew where the ball was in the air. The quarterback jumped into a sea of jerseys from both teams and grabbed the ball out of the air. He was quickly tackled for a gain of just two yards, but the Mountaineers were lucky it wasn’t worse.

So were the Panthers. Smith was hit hard immediately after grabbing the ball out of the air, in a play that surely made Maul hold his breath a bit.

Smith threw two interceptions in the game, but Maul said he thought the effort was motivated his desire to avoid a third.