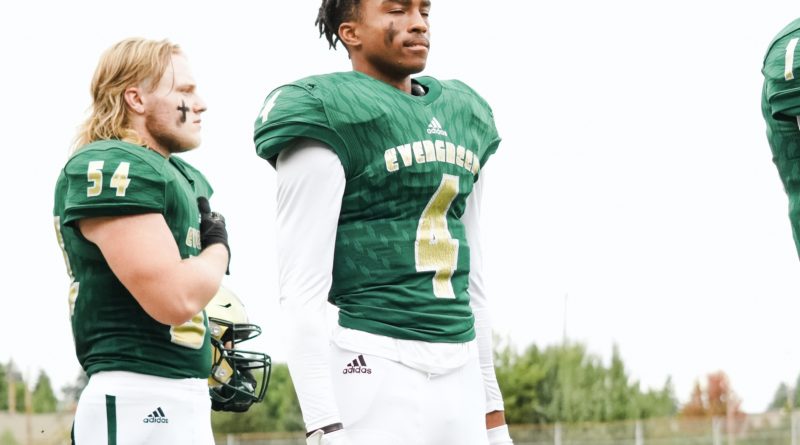 VANCOUVER, Wash. — Off the field, Jonathan Landry is noticeably soft-spoken. Just ask his coaches and teammates, who describe him as unassuming and quiet, whether in the halls at Vancouver’s Evergreen High School or in a crowded locker room with teammates.

“He just kind of goes about his business and speaks when he needs to speak about things,” Evergreen coach Christian Swain said of the 5-foot-10, 160-pound junior. “He’s just that way — humble.”

On the gridiron, Landry is a blur. He’s a pass-catching receiver, a dangerous return specialist and a hard-hitting cover cornerback — a three-star prospect and the ninth-ranked junior in the state, per 247Sports.com — whose ability to swallow up receivers in pass coverage have attracted offers from Virginia, Utah State and Florida Atlantic.

Why does his seemingly passive outward approach command so much respect among teammates and peers?

He earned that back on his first day in the program.

When a 14-year old Landry arrived at preseason camp as a ninth grader, he was entering a program that, on average, had won fewer than three games per season each of the three years prior.

Swain, then a first-year coach hellbent on building a winning culture, assigned Landry to cornerback, a position Landry had never played. Often the most athletic player on the field growing up, he played quarterback at the youth level.

Despite the inexperience, Landry wanted his first impression to turn heads.

He demanded to line up across from Zyell Griffin, the Plainsmen’s unquestioned leader (now a receiver at UNLV), then a senior.

“You look over and see him actually guarding one of the top dudes in Washington,” junior receiver Thomas Hilderbrant, a middle school friend of Landry’s recalls. “You’re like, ‘Dang, that’s crazy.'”

Landry had heard about Griffin for years. And he wanted a piece of him with all his teammates and the entire coaching staff watching. This wasn’t a coach testing hin. Landry was the architect of his own baptism into varsity football.

“I knew if he was one of the best players in our league,” Landry said, “and if I was able to guard him, I would have the confidence that I could guard anybody.”

But deep down, he was admittedly nervous. Was this a bad idea after all? What if he wasn’t ready? What if he made a fool of himself in front of the whole team?

He tried not to even entertain those thoughts. And his trepidation was quelled by teammates and coaches hyping him up.

“They made me feel like I belonged there,” Landry said. “They believed in me, so it was easier to believe in myself.”

Landry’s gusto that day earned him a starting spot at cornerback as a ninth grader, playing for a team that logged its best season in years, going 5-5 and narrowly losing a Class 3A state regional game to Garfield.

And by season’s end, he was already on a path to lead the program for years to come. The week of the Garfield game, the program’s biggest game in years, Swain recalled seeing Landry match Griffin’s speed and agility in conditioning drills.

“I remember looking at our coaches and going ‘this kid’s going to be special.’ ” Swain said. “And he always made it a point to run next to Zyell. He wants to measure himself against the best guy on the field at all times.”

Two years later, it’s Landry who is often the best player on the field. Because of that, his role has expanded.

He’s playing more safety so teams can’t just throw away from his side of the field, and he’s expanded into the team’s top skill weapon on offense, as well as a dangerous return specialist for the Plainsmen (2-0).

But most of Landry’s sophomore season was spent in COVID-19 lockdowns, hoping he’d even get the chance to play. Each time his season was pushed back, Landry said, he doubled down on his workouts, tried to stay as positive as he could and turned to daily bible readings and leaned on his grandmother whenever his faith wavered.

“I just kept praying that we would get a season because we did,” Landry said, “and I’m thankful we did get a season, even though it was so short.”

When he finally got the chance to play a five games in the spring, he logged six interceptions and 12 touchdowns.

This year, Landry’s on-field demeanor has been more controlled. He wears a confidence that brings out less bark, more bite. When he roars after a big hit, a long run or his 70-yard punt return for touchdown in Week 1, Landry’s celebration isn’t a show of force, or a “look at me, I told you so” credo at his opponents.

“It’s expected, that’s what I’m supposed to do,” Landry said. “I don’t feel that much need to celebrate because the plays that I make are supposed to be made.”

His hope that his teammates feed off of his energy — just like they did the first practice of his first season — is starting to be realized.

When Hilderbrant started to compete for starting positions at receiver and cornerback, he thought back to what it was like to watch his friend challenge the best player in the program on the first day of practice.

Now, Landry is essentially Griffin from two years ago.

And Hilderbrant is the one wanting a piece of the team’s star player.

“I want to go against Jonathan,” Hilderbrant said. “The work ethic, seeing him work, it makes me want to work more.”