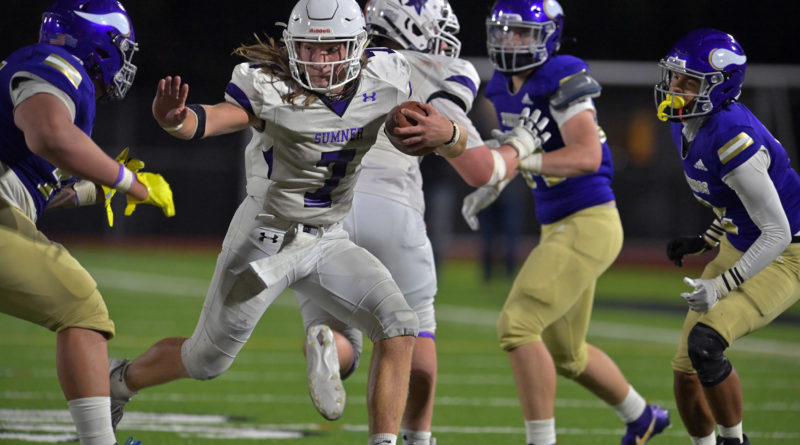 PUYALLUP – Living in enemy territory for much of the night, fourth-ranked Sumner finally cashed in late to end its run of futility against No. 6 Puyallup.

Reigning 4A SPSL player of the year Peyton Wing rumbled in from 23 yards with the game-winning touchdown with 3:25 to go, and the Spartans beat Puyallup, 26-21, at Sparks Stadium.

The Vikings had a chance to win it, driving to the Spartans’ 22 in the final seconds, but Micah Balzarini’s last-play, fourth-down pass in the face of pressure went out of the reach of everybody in the back of the end zone as time expired.

Puyallup grabbed a 21-17 lead on Balzarini’s 25-yard touchdown strike to Dane Parker with 2:41 remaining in the third quarter.

Wing’s score capped a six-play drive that took three minutes off the clock – and gave Sumner its final lead, 26-21.

The Vikings had won the past four meetings against Sumner.

Here are highlights from the Sumner-Puyallup game (and featured photo by Vince Miller):