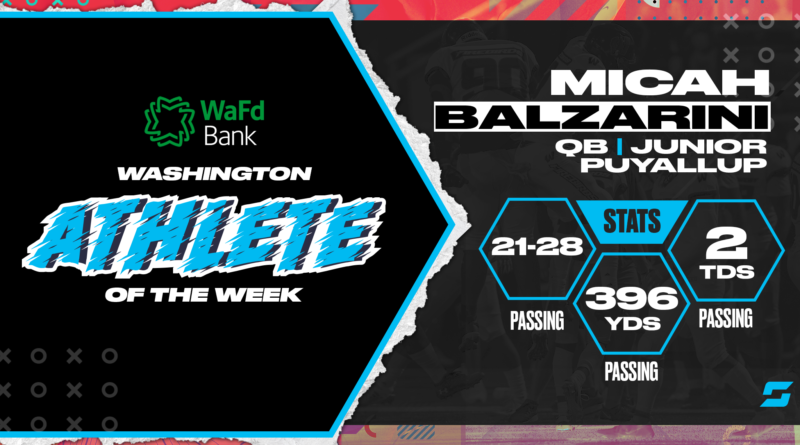 Balzarini received 38.55% of the vote, beating out North Creek’s Rocco Traore who finished second with 31.96%. Eastlake’s Parker Barrysmith finished third with 13.39% and White River’s Payne Plaster finished fourth with 3.75%. There were over 69,000 votes tallied this week!

Passed for 199 yards and three touchdowns in the first half of a season-opening thrashing of short-manned Kentwood. (READ MORE)

Completed 31 of 61 pass attempts for 698 passing yards in a 94-60 loss to Tri-Cities Prep, an unofficial stat count, per head coach Craig Lukins.

Ran for 187 yards on 17 carries and four total touchdowns, including when he took a kickoff 87 yards to the house in a 42-7 win over R.A. Long, per The Daily News.

Totaled 284 all-purpose yards, and had a receiving touchdown and returned a kickoff for a score. Also had two INTs on defense.

Rushed for 115 yards and threw for 189 more and accounted for seven total touchdowns (two rushing, five passing) in a win over Woodland.

Fenkner scored three goals to lead Lakeside to an 8-1 win over Kamiak on Sept. 4.

Accounted for 146 passing yards, 124 rushing yards and two touchdowns in a 56-12 win over Bonney Lake, per The News Tribune.

Rushed for 165 yards and a touchdown in a 48-42 shootout win over Rainier.

Threw for 229 yards on 16 of 30 heaves and accounted for a total of seven touchdowns in a blowout win over Stadium, The News Tribune.

Hiemstra had 7 receptions for 128 yards and 2 touchdowns in Bellarmine’s win over Olympia.

Rico Jerez-Sosa, Evergreen of Seattle (2A)

How’s this for a junior season debut? Rushed for 377 yards and four rushing touchdowns on 22 carries and caught three passes, accruing 118 receiving yards and another touchdown in a 50-42 loss to Sultan.

Rushed for 141 yards and four touchdowns in a blowout opener against Enumclaw.

Rushed for 286 yards, accounting for all five of the Cougars’ touchdowns in a 37-20 win over White River.

Caught three passes for 160 receiving yards and two touchdowns in a 56-0 win over Franklin Pierce.

Turned 17 carries into 125 rushing yards and two touchdowns in a 27-0 win over neighboring rival Columbia River, per The Columbian.

Had a 17-for-19, 358-yard passing performance with five passing touchdowns and another on the ground on a 59-35 win over Lakewood.

Logged 142 receiving yards on five passes and scored twice — once on a screen pass he took 65 yards, and another on a 12-yard reverse run — to lead the Titans offensively in a 35-17 loss to O’Dea. (READ MORE)

The exact yard total is unofficial, but he is believed to have caught 13 passes for a total of 500 receiving yards in a 94-60 loss to Tri-Cities Prep, per coach Craig Lukins.

Rushed for three touchdowns and caught a fourth, tallying 287 yards of offense to help Sunnyside beat rival 2A opponent Prosser, 34-23, per The Yakima Herald-Republic.

The senior QB completed 22 of 28 pass attempts for 308 passing yards and four touchdowns in a win over Edmonds Woodway, Nobach’s first game back after suffering a broken collarbone in the spring.

Took 16 carries and rushed for 107 yards and three touchdowns in a win over ranked Lincoln (Tacoma), per per The News Tribune.

Logged 133 yards on 15 carries, including a 58-yard touchdown run and had an interception and two solo tackles in a loss to Capital.

Scored four touchdowns on the ground, including an 83-yard run, a 99-yard kick return and a 50-yard punt return in a win over Archbishop Murphy.

Two interceptions, including a 47-yard pick six and 66 receiving yards on three catches in a 45-0 win over Heritage.

Gained 180 yards and scored four touchdowns on the ground in a 44-6 win at Washougal.

Rushed for 187 yards and two touchdowns in a 46-14 debut against Kentridge, per The News Tribune.

Accounted for three touchdowns on offense and a interception and five tackles on defense in a 59-35 win over Lakewood.

Turned 31 carries into 186 yards and two touchdowns, per Evans Rankings.

Scored three touchdowns, including a 65-yard run in a season-opening blowout of Emerald Ridge. Accounted for 204 rushing yards on 10 carries.

Completed 7 of 10 passes for 254 yards, added 67 rushing yards and scored four total touchdowns — three passing, one rushing — in a 56-0 win over Franklin Pierce.