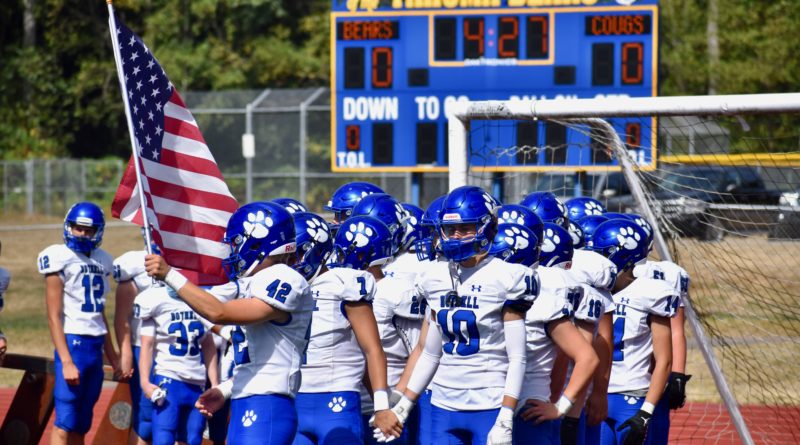 COVINGTON – There is a new load of coal fueling the “Blue Train” express this fall.

It’s a transfer quarterback from Hawaii who hasn’t played organized football in two years. And it’s a frisky tailback who is faster and stronger than he appears.

Who knows how far this new offensive backfield – and this very good, experience offensive line – can carry reigning 4A KingCo Conference champion Bothell this season.

What is known is the Cougars are off to a quick start by notching back-to-back road wins – the latest a 40-21 victory over 4A NPSL Tahoma on Saturday at Bill Maxwell Stadium.

That new quarterback is Logan Lacio, who completed 16 of 22 passes for 221 yards and three touchdowns. And that revved-up tailback is Bryce Kooy, who rushed for 132 yards on 14 carries, scoring a pair of touchdowns.

Bothell amassed 488 yards of offense against the Bears.

“We got better this week – in practice and in this game,” longtime Bothell coach Tom Bainter said. “We still have a long ways to go. But it’s encouraging … because there is a ceiling there we haven’t yet attained. But I am pleased.”

Here are four observations from the Bothell-Tahoma game:

THIS IS BRYCE KOOY’S OFFENSE

The best adjective to describe the Cougars’ new primary rusher, who stands at 6-foot and 180 pounds?

Or here’s another term – runaway explosive.

“He is fun to watch,” Bainter said. “And fun to call plays for.”

Kooy was the star of Bothell’s first series, totaling 66 yards on three carries.

And it was his third carry that was the game’s best highlight.

After breaking loose, it appeared the junior was going to go down near the right sideline – except he absorbed the blow, kept his balance and took off for the races on a 57-yard touchdown scamper for a quick 7-0 Cougars’ lead.

“Bryce is really good at change of direction, has great speed – and he makes plays out of nothing,” Cougars right tackle Noah Ochoa said.

BUT THIS IS THE OFFENSIVE LINEMEN’S TEAM

It is rare, indeed, that an entire starting offensive line returns the next season.

Especially one as cohesive was what the Cougars run out there.

It is led by Oregon State commit Luka Vincic at left tackle and Parker James at left guard. Both were all-4A KingCo selections.

Auden James – Parker’s brother – is the center, and Rudy Podany and Ochoa man the right side of the line.

A big reason why a new offensive-backfield cast can feel so comfortable so early is because they know they will be taken care of up front.

“Taking that leadership role has been great,” Ochoa said. “We are a really tight group, and the strength of the offense, I think.”

After Andrew Sirmon finished up a productive career at quarterback last spring for the Cougars, the plan moving forward was to turn the offense over to Danny Sirmon, his younger brother as an incoming sophomore.

But once Bainter realized that Danny needed to ease his way into varsity action, he also realized he needed another option.

That is where Logan Lacio comes in. He transferred from Hawaii in late July, and started a crash course learning the Bothell offense.

And while he’s not going to light the world on fire as a passer, he does all the little things efficiently that Bainter asks – especially limiting mistakes.

But he can add a spark – and did at the end of the first half Saturday.

With Bothell up 20-7, the Cougars took over at the Tahoma 46-yard line with one minute remaining.

Lacio didn’t need nearly that long to drive the length of the field, completing a 22-yard pass to Lincollo Matson, and then a 24-yard touchdown to Cody Petrin just inside the right pylon with 34 seconds to go before halftime.

The Bears always seem to find a dynamic signal caller who can rumble through defenses as a runner.

But Gavin Garcia is a true dual threat – and he showed that Saturday by passing for 181 yards (completing 14 of 23 passes) and two touchdowns, and rushing for 115 yards on 19 carries.

Garcia’s weakness is his deep ball, but he can hit targets on the move. And he has a nice rapport with wide receivers Akea Causing, Dylan Shipley and Kage Repenn.

Tahoma cut it to 27-14 on Garcia’s 11-yard touchdown strike down the left seam to Treyson Ikeomu at the 7:51 mark of the third quarter. But Lacio answered for the Cougars four minutes later with a 49-yard score to Sam Stewart.

“This was a good barometer for us to see where we are at,” Davis said. “That is a good football team over there. And I think we can be as well.”

One thought on “The 4A KingCo’s top locomotive still roars with speed, power and talent. Now Bothell has to let its new pieces settle in: 4 observations”