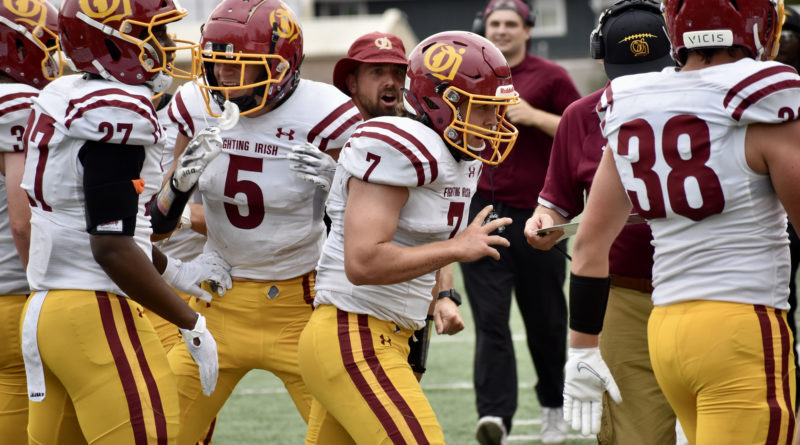 WEST SEATTLE – The takeaway was clear.

Take away O’Dea football standout running back Jason Brown, and the top-ranked Class 3A team in the state of Washington still has plenty of dudes.

And, plenty of punch on both sides of the ball.

Georgios Kotsakis, the backup fullback before starter Donovan Agasid was injured in the season opener, loosened up the Kennedy Catholic defense with a career-high 142 yards rushing on six timely carries and was the difference as O’Dea decked the Lancers, 49-0, in a non-league showdown Friday night at West Seattle Stadium.

Brown, who put up 284 yards and three touchdowns in a Week 1 victory over Union of Vancouver, still managed 70 yards rushing and two touchdowns on 22 carries as Kennedy Catholic (0-2) keyed on the Irish sophomore. The Lancers had success early, limiting O’Dea (2-0) until things started to flow offensively late in the second quarter.

Kotsakis, a senior, did a role reversal with Brown, popping off runs of 41, 57 and 23 yards in the victory.

Ultimately, a slew of playmakers for O’Dea made the difference, especially on defense. The Irish finished with six takeaways, including five interceptions of the two Lancer quarterbacks.

“It really was a close football game, closer than the score,” said longtime O’Dea coach Monte Kohler, whose son, John, went 7-of-14 passing for 152 yards and two throwing touchdowns. “We struggled. We had to punt the ball and they won a lot of battles up front. We got two late scores off of some turnovers.”

Here are four observations from the O’Dea-Kennedy Catholic game:

THE BACKUP FULLBACK WAS THE MOST VALUABLE BACK

The 5-foot-11, 201-pound Kotsakis took advantage of the Kennedy Catholic defense and took a big step forward for O’Dea, making himself a constant viable running threat.

“He did a great job,” Kohler said of Kotsakis, who took over as the starter at fullback when Agasid broke his ankle in Week 1. “Obviously, they tried to take Jason away, and Jason’s pretty special. There were a lot of bodies attacking him and that opened things up. [Kotsakis] did some good things.”

The O’Dea faithful held its collective breath when Brown lay on the ground, first holding his ankle and then his head, with 11:28 left in the game and the Irish up 29-0.

It got worse when Brown trotted off the field with a limp and didn’t return. Kohler downplayed his star’s injured right ankle.

“He tweaked his ankle a little bit,” Kohler said of the fourth-quarter run for 4 yards that caused Brown to leave the game. “It was more of a bump on it than anything else.”

O’Dea will likely need Brown’s services in next Friday’s 5 p.m. game at Seattle’s Memorial Stadium against Class 4A power Lake Stevens, which is returning from a COVID-related reset.

LIFE AFTER HUARD AND COMPANY HAS HAD TOUGH TIMES

Lancers’ coach Sheldon Cross might have found a new go-to receiver in Nate Barnes, a 6-foot-2 junior, who made five catches for 70 yards against O’Dea.

“We’re better than the final score,” Cross said after the loss. “Our defense played really good again and that’s one of the best backs (Brown) in the country and one of the best O-lines in the nation. I’m proud of the way our guys competed. That’s a really good football over there, and they have a fantastic program.”

But Cross, whose team in his six years have shown great offensive prowess, needs to see improvement.

“This just goes to show you how good Sam and our receivers were,” Cross said. “This is this team’s first real battles. This is a new team, a new chapter. It’s basically like starting from scratch in a sense. We have to remember that.”

O’DEA KNOWS HOW TO FORCE TURNOVERS

The Irish defense, led by senior lineman Mark Nabou, turned up the volume in the second half on both Kennedy Catholic quarterbacks, junior starter Mason Hayes and backup freshman Devon Forehand.

O’Dea caused five of the Lancers’ six turnovers after halftime. Hayes threw two picks and lost a fumble in the second half before giving way to Forehand in the fourth quarter. Hayes finished with three interceptions and Forehand two.

One of the most impressive plays of the night came when Nabou, the 6-foot-4, 350-pound senior, came roaring into the Kennedy Catholic backfield with 9:51 left in the third quarter.

Nabou, who as an offensive guard is drawing interest from the likes of Texas A&M, Michigan, Texas, USC and Washington, charged in a made a strip sack of Hayes to give the Irish possession of the ball.