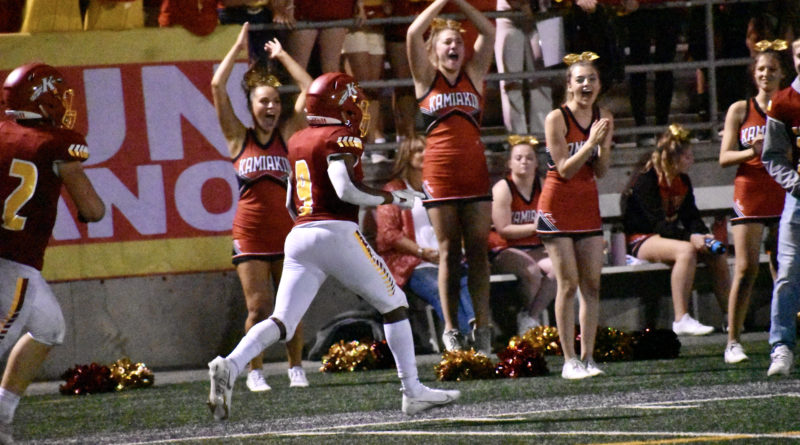 KENNEWICK, Wash. — As students lined up on the edge of the field to form a high-five line for players a postgame celebration, Gabe Tahir’s face exuded pure joy.

Kamiakin had just handed conference foe Chiawana a 46-24 loss on Thursday at Lampson Stadium, and the gesture by students fit the moment. Kamiakin (2-0) had finally handed the three-time defending league champ Riverhawks (1-1) their first MCC loss in 19 games. Three games in that streak came against Kamiakin.

In what has been a low-scoring, defensive battle in recent years turned into an offensive clinic behind Kamiakin senior QB Henry Mercado’s big night.

“It’s a big improvement as a team,” senior Payton Graham, a Gonzaga pitching commit, said. “Tonight, we made the big time plays.”

Kamiakin led 20-17 at the midway point after a first half where Chiawana was matching it blow for blow. Kamiakin turned to its defense, which forced momentum-killing turnovers in the third quarter to help pull away.

“It’s a good wake-up call for us,” Chiawana Scott Bond said after his first loss as a head coach.

By beating Chiawana, Kamiakin clears a tall hurdle early in the second week of a conference title battle that could come down to the last week of the regular season. Here are five takeaways:

Henry Mercado is in his third season as Kamiakin’s starting quarterback, yet he’s not mentioned in the same breath as the state’s best by recruiting analyst and casual viewers.

It’s time folks started paying attention to the senior QB. Kamiakin coach Scott Biglin would be the first to tell you. The defense on Thursday night was forced to respect Mercado as a playmaker after he went for 236 passing yards and five total touchdown — four passing, one rushing — with no interceptions.

The more Mercado has developed, the more Biglin’s staff sees the way Mercado has opened up the offense — and the playbook at large.

“He’s seeing the field really well,” Biglin said “Definitely underrated by everybody in the state. I think he’s the best quarterback, hands down. I love the kid, he’s worked hard for everything.”

Kamiakin has a new cast of playmakers

Gabe Tahir will be the first to tell you wide receiver is not his favorite position.

But the hard-hitting lockdown corner who holds an offer from Penn State knew he’d need to play a bigger role on his team this fall after two-time MCC MVP Tuna Altahir, his older brother, graduated along with standout skill players Woodley Downard and Messiah Jones graduated (all three are at Eastern Washington).

Biglin didn’t only want to see Tahir’s Division I athleticism be utilized on one side of the ball, so he approached him about playing receiver over the summer. Tahir was hesitant. He sees himself as a corner, and doesn’t love playing receiver.

Once Biglin demonstrated what a dynamic element he could add to the offense, Tahir obliged.

Maybe coach knows a thing or two after all. Tahir had four catches for 126 yards and a 42-yard run where he caught a screen pass, cut across the field and juked nearly the entire defense (see for yourself).

“Honestly, my instincts from my running back days kicked in,” Tahir said.

Added Graham: “He’s special. He’ll make nothing into something.”

Graham’s touchdown put Kamiakin ahead 26-17 and helped pad the lead in a third quarter that proved crucial.

“Even if it’s a small little thing,” Graham said, “I love coming out and helping my teammates put a ‘W’ on the scoreboard.”

Kamiakin was tired of losing to Chiawana

It’s no secret that Chiawana has had Kamiakin’s number in recent years.

The Riverhawks were winners of three straight over Kamiakin — the last two by a total of four points. So you’d understand why Kamiakin wanted ever so badly to end that streak.

Behind Kamiakin’s experience, athleticism and poise under center, it got rid of the monkey — err, Riverhawk — on its back.

“It’s a huge win for our program,” Kamiakin coach Scott Biglin said. “We’ve been close the last couple years and could just never get over that hump.”

Added Tahir: “It was for (Tuna Altahir), all his friends that haven’t beat these guys in years.”

Throughout practice this week, Biglin stressed offensive discipline and urgency. Shaped by the last two years, which Chiawana won by a total of four points, Kamiakin was determined not to let the game be decided by one mistake.

“We’ve got to stay locked in,” Graham recalls Biglin saying, “and once we get up, we can’t let off the gas pedal.”

Zamora’s 27-yard strike to William Whiting evened things at 7-7 early. The Riverhawks’ 78-yard drive that ended with a one-yard touchdown run by Ian Mohl pulled them within three at half. Even when the game was all but put away, Zamora hit Marco Elizondo for a 27-yard touchdown pass in the fourth quarter.

But the Riverhawks’ inability to close the deficit was, in part, self-inflicted. They turned it over three times after halftime, thwarting any momentum gained by those big plays.

“You can’t turn the ball over three times in six plays,” Bond said. “Good drive to end the first half, had some momentum going, then you turn it over. Can’t overcome that.”

Elizondo was a bright spot. The Pasco transfer had 10 catches for 127 yards and a touchdown Thursday. Zamora had 246 passing yards and four touchdown passes with an interception.