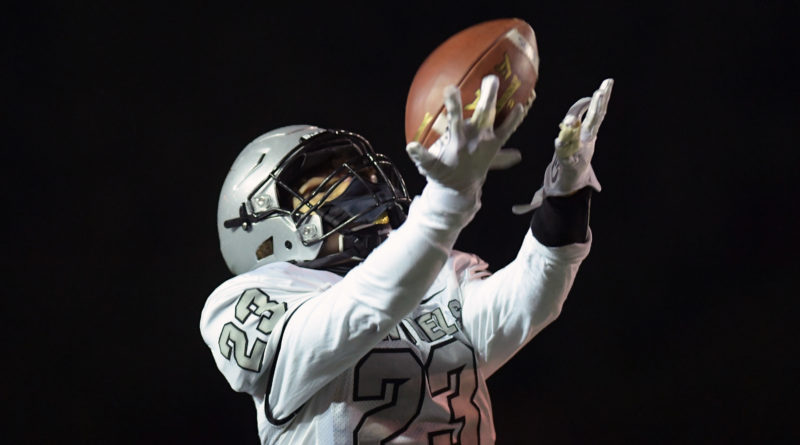 A year ago, he was a top-notch point guard getting back into football. Now, this cool, calm and collected dual threat is arguably best signal caller in state.

Linebackers, be warned – if you want to run up to blast him, just remember, this all-MCC first-team tailback thirsts to run you over twice as hard.

Best in-state senior running back recruit – and WSU commit – is a bulldozer in strength, and a Range Rover in speed, traction and change of direction.

A fluid route-runner who snatches away passes from in-better-position defensive backs at the apex of passes – he is a bona fide star-in-the-making.

When you go around poking for NFL prototypes – size, speed and strength – this is your guy. All-state performer will head off to Notre Dame.

The reigning 3A PCL player of the year’s best position on offense is at wide receiver, but he can play running back, too. Just a natural playmaker.

Has the big personality to match his massive frame (6-6, 330), this all-3A NPSL first team tackle will make some big-time Power-5 program very happy.

The state’s No. 1 senior recruit is as complete an all-around offensive tackle as the state has seen in years – and he holds nearly 30 FBS offers.

The lone remaining starter from the 2018 state semifinal squad, this Oregon commit is as athletic as he is powerful at left tackle for Viks.

Could start for virtually any team at quarterback, tight end or safety – reigning 2B Central most valuable player in football and basketball.

Quiet off the field – and loud on it. Converts 50-yard-plus field goals with ease, and Texas A8M commit loves booting kickoffs through goalposts.

On this Eagles’ defense, the buck stops here (with twin brother, Hunter, too) on the interior of the defense. Idaho State commit’s motor never stops.

Talk about a mass-upside pass rusher off the edge, this all-4A/3A GSL first teamer is too big and twitchy to handle with just one blocker.

His future position at WSU is offensive tackle, but in high school, he has been part of an impressive run of high-level pass rushers at the 2A level.

Wherever he goes, people point him out – and Power-5 recruiters offer scholarships (he has 33 of them). Still raw technically, but elite athletically.

Perhaps more know him in from other roles (all-Wesco running back, point guard), but he could be best linebacker in state, if he chose to.

The last of the key defensive contributors from back-to-back 3A state championship squads, nobody can match his physicality (or long hair) in the middle.

The only thing holding him back from being a major FBS recruit in his size. But effort and production? He is MCC’s top defensive player for those reasons.

There were few bigger – or better – shortened-spring season revelations than this teenager, who gobbles up ball carriers. Reigning 4A SPSL player of year.

Look at all the other stuff he does – all-state quarterback and WSU commit for baseball at catcher. But he has 20-plus interceptions at safety, too.

Mix athletic, impulsive and ultra-competitive, and you get one of the best sure-handed ball hawks in the state as a rover for the 4A Wesco champions.

By the way he studies film, and reads and reacts to quarterbacks, it is obvious he is a coach’s son (dad is UW assistant Ikaika Malloe) playing free safety.

There is a reason Penn State is coming hard at this all-MCC first teamer at cornerback – he is a big athlete with strong hands and smooth moves to the ball.

What’s not to like? He is big, can play multiple positions and is arguably the fastest guy on the team. Oh yeah, his booming punts shave tree tops.