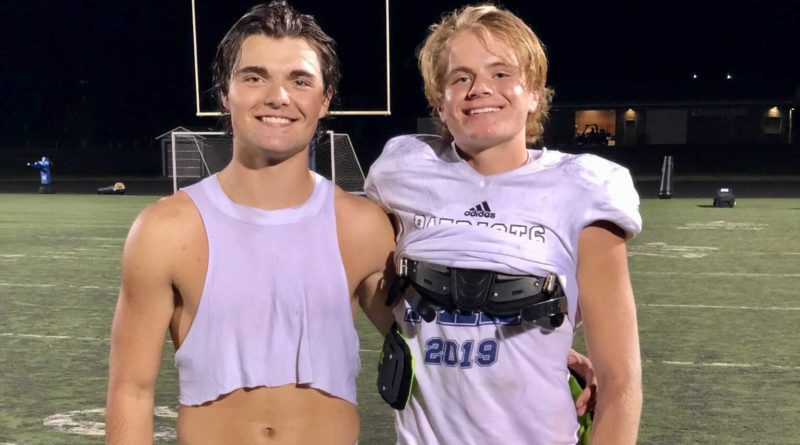 Once Keegan Bishop settled into the flow of Liberty Christian’s season-opening game, all he could do was marvel.

The junior quarterback was piecing together an 8-man state record-setting passing performance, throwing for 684 yards and eight touchdowns. At the same time, he had a front row seat to watch his teammate, receiver Connor Newell, not just break a record, but shatter it.

Bishop and Newell both set new 8-man single-game state records in the Patriot’s 94-60 season-opening loss to Tri-Cities Prep on Friday, a game that was scheduled four days prior and played as an 8-man contest due to a limited number of available players on each team.

“I wasn’t really thinking about my numbers and breaking a record,” Bishop said. “But I knew for sure (Newell) broke the record, though. There was no doubt in my mind that he broke it.”

Added Patriots coach Craig Lukins, chuckling: “I don’t know what got into him … this was a next-level performance.”

Want to break a 1B state passing record? Your chances may not be better than playing under Lukins at Liberty Christian, who implemented the Air Raid offense in recent years before classing back down from 2B to 1B in 2020.

Most of Newell’s touchdowns came on short passes — hitches, screens. It’s what he did after the catch that turned heads, and kept the Patriots in a game against a high-octane Jaguars offense that put up 94 points and more than matched the Patriots’ offense.

Newell scored the game’s first touchdown and the offensive fireworks started right away. TCP pushed its 32-28 first quarter lead to 14 by half and doubled it midway through the third, putting the Patriots out of reach.

Newell said the fact that Liberty Christian hadn’t beat TCP is his four years of high school served as some of his fuel for the big night.

“I wanted to go out there and give them all I had,” he said. “I definitely thought I did.”

He also wants to show people he is every bit the receiving threat of the much-acclaimed Lesser, who graduated in June and is the younger brother of all-time 8-man rushing John Lesser. Friday’s season-opener, he hopes, shows he is.

(For the record, Aidan Lesser broke the record with 18 catches. Newell did it with 13.)

During the game, and in the days since, friends, family and teammates have showered him with congratulations. One of those teammates is middle linebacker, receiver and DB Trevor Newell, Connor’s twin brother.

“Every time I made a touchdown, I could hear him yelling, ‘that’s my brother!’” Connor said.

At one point during the game, Bishop asked him (in jest), “what are you on?”

Bishop’s 684 passing yards set a new state mark previously held by Will Hoppes of Tri-Cities Prep, who threw for 639 passing yards in 2008.

Their chemistry was forged through years playing together and deepened over the summer through one-on-one throwing sessions.

Achieving state records on the same night, they said, would have been that much sweeter had they won, but the Patriots, No. 5 in SBLive’s 1B power rankings, have eyes set on a 1B state title, which would be the program’s first since 2012.

On Sunday, Newell slept over at Bishop’s house and the two pored over the film, dissecting the good and the bad. They lingered a little longer on the plays that will now live on in the history books.