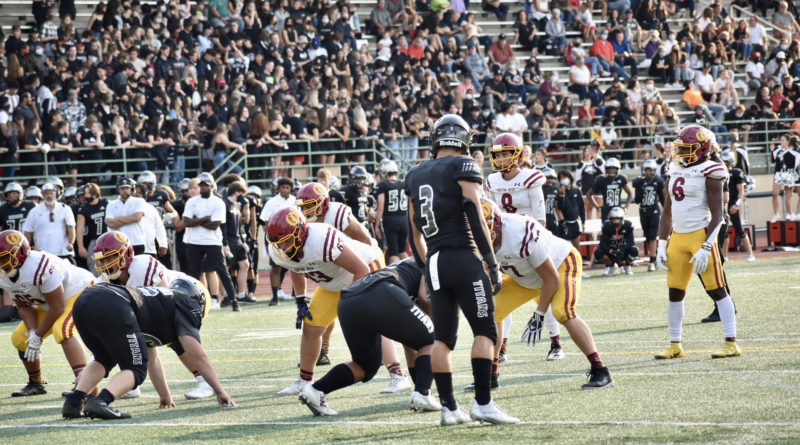 Ranking rationale: The consensus No. 1 overall team picked up right where it left off in the spring, defeating Rogers (Puyallup) in blowout fashion in Week 1. Up next? An Oly team coming off of a nail-biting loss to mark the start of 4A South Puget Sound League play.

Ranking rationale: New pieces gelled quickly on the OL and DL, making way for sophomore RB Jason Brown to pick up where he left off. After a breakout freshman season in the spring, he turned 23 carries into 284 rushing yards ad three touchdowns (21, 80 and 22-yards runs) and the Irish wore down the talent-laden Titans.

Last result: Did not play

Ranking rationale: Have not yet had the opportunity to play. The Vikings canceled their first two games, including what would have been its season opener against Eastlake, due to COVID-19 protocols.

Ranking rationale: Good luck slowing these Panthers down. Led by QB Braeden Smith’s four touchdowns, Prep outraced Archbishop Murphy and couldn’t keep track of Smith, who rushed for two touchdowns and scored two more on special teams. Can Blanchet challenge Prep like it did perennial 4A KingCo power Woodinville, which it lost to 29-26 in its opener?

Ranking rationale: The Bullpups started off strong, coasting past U-High in its opener behind 127 rushing yards from quarterback Ryan McKenna and three touchdowns from RB Nick Bankey. G-Prep faces a test in Week 2 in Eastmont of the 4A CBBN, who coming off a strong opening win over Central Valley.

Last result: Did not play

Ranking rationale: It’s wait-and-see for “SWAY.” The Sentinels canceled their first two games after positive COVID-19 cases within the program spurred contact tracing, including what would have been its Week 1 opponent, Gig Harbor.

Ranking rationale: Strong showing from the Wolverines in Week 1 sets them up well for a tough remaining nonleague slate. Rushing the ball 60 of 61 plays from scrimmage, they thumped perennial playoff team Peninsula behind 445 yards of total offense.

Ranking rationale: The Spartans are rolling. Their offense exploded behind Bo Carlson’s four touchdowns and three more from last year’s 4A SPSL player of the year Peyton Wing to handle up-and-coming Emerald Ridge.

Ranking rationale: Among the strongest teams on the east side of the state entering the season, the Lions took care of business. Opened the season with a 3A Mid-Columbia Conference win over Walla Walla on the road.

Ranking rationale: Brought its rushing attack on the road and scored seven touchdowns on the ground to beat Moses Lake on Saturday for coach Tom Bainter’s 200th career win.

Ranking rationale: Defeated Skyline to open the season behind a tremendous opening start from QB Micah Balzarini and a do-it-all outing from wideout Jordan Dwyer. Opens league play against the other “Vikings” of the 4A SPSL at Sparks Stadium.

Ranking rationale: There’s a lot to build on from a tough opening-week loss, and and an immediate test ahead to put it in the past. The Titans showed flashes of offensive spark, highlighted by Tobias Merriweather’s touchdowns of 65 and 12 yards. Next up is deep and talented Mountain View.

Ranking rationale: It wasn’t pretty, but the Grizzlies escaped opening weekend with a victory, beating the rival Panthers for the 10th time in a row in the Dick Armstrong Classic. RB Trey Leckner terrorizes his old team.

Ranking rationale: A reloaded Bombers group expected to compete for a Mid-Columbia Conference title opened the season with a bang, shutting out conference opponent Pasco. Can they keep it rolling against Hanford before a Week 3 showdown with MCC power Kamiakin?

Ranking rationale: What a start for the Wolves. Parker Barrysmith threw for 199 yards and three touchdowns, but it was Will Eaton’s 49-yard punt return for a touchdown in the first quarter that got things going and they beat a Kentwood team missing seven starters.

Ranking rationale: Lost to Yelm despite 274 passing yards and two touchdowns from electric junior dual-threat QB Gabarri Johnson. Can the Abes rebound against Class 4A Skyline?

Ranking rationale: For a team that heard all of your premature summer and preseason program obits, the Crusaders’ Week 1 showing shouldn’t be taken lightly. After learning they would be down 24 players (10 starters) due to COVID-19 contact tracing the night before the game, they rallied to beat visiting Kennedy Catholic (4A) behind remote play-calling and a solid start from junior QB Brady McKelheer.

Ranking rationale: Strong showing from its talent-laden defense, but can the Lancers and that Air Raid attack find a rhythm on offense? Lost to a short-manned No. 20 Eastside Catholic on the road to open the season.

Ranking rationale: The typically-tough Thunderbirds spotted Enumclaw a 7-0 lead – then kicked it into high gear and cruised to a surprisingly-easy victory against the 2A SPSL playoff hopeful. Question is, will Tumwater even have a close game during the regular season?

Ranking rationale: Opened the season with a road win at Cheney, which serves as a tune-up for an atypically early “Battle of the Bell” rivalry matchup against Mead at the schools’ shiny new district stadium.

Ranking rationale: Tomahawks did not need to ease into the fall season as they soundly defeated a 3A Wesco South opponent at home, rushing for 373 yards as a team. RB Dylan Carson had 210 yards and three touchdowns in his senior-season debut.

Ranking rationale: The Bears got into a big hole early (27-7 deficit) and rallied behind QB Luke Abshire – but saw their game-tying 2-point attempt thwarted on the road against an emerging 4A CBBN program. Too good not to regroup.

Power rankings for each Washington classification