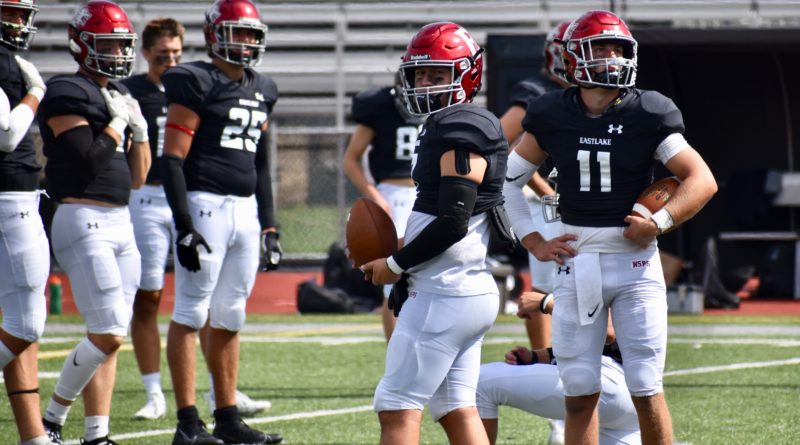 SAMMAMISH – There was a sentiment – unusual, at best – that the power-broker 4A KingCo Conference, which was breaking in a lot of first-year starting quarterbacks, would fall back a bit this fall.

That is fool’s logic.

Parker Barrysmith passed for 199 yards and three touchdowns, all in the first half, and Eastlake rolled up 408 total yards – 288 before halftime.

Will Eaton caught one of Barrysmith’s touchdown passes, and also returned a pair of punts for touchdowns (49 and 53 yards).

Down seven projected starters, including UCLA commit DeAndre Gill at linebacker, the Conquerors finished with 57 yards of offense.

“(Losing this game) wasn’t because we were down guys,” Kentwood coach Mike Bush said. “Eastlake has a great team. They played hard. They are well-coached.”

KYLE SNELL WAS ‘NERVOUS’ SITTING IN THE CAPTAIN’S CHAIR

Snell is used to opening weekends of an Eastlake football season – he was the offensive coordinator under Don Bartel the past eight seasons.

But when Bartel stepped down after the spring season, Snell was quickly promoted to lead chair.

And Saturday was officially the first step in a new direction.

He didn’t have much time to dwell on it, though. He was at the school for the team’s pancake breakfast at 8:30 a.m.

And 45 minutes before kickoff, Snell’s two young children came on the field for a final pre-game hug – which brought a smile to the new coach’s face.

“I don’t know if they cared at all (it was my first game). They probably have more fun coming to practices,” Snell said. “But coaching is a big-time commitment, and it is nice for other people to want to be part of it.”

WILL EATON IS A BEAST, JUST LIKE HIS FATHER

Eastlake went right down the field on its opening series – all 55 yards were on the ground – to take a quick 7-0 lead.

And after the Kentwood offense sputtered, it gave the ball right back. And it didn’t take nearly as long for the Wolves to cash in.

Thomas Allam’s short punt drifted toward the right sideline. Eastlake’s Will Eaton immediately tracked it, got a full head of steam and started running down the left sideline untouched on a 49-yard scoring return at the 6:31 mark of the opening quarter.

That touchdown opened the floodgates.

“It was a big juicer to get us going,” Barrysmith said.

Kentwood has become one of the better power-running offenses in Class 4A, so it came as a little bit of a surprise that the Conquerors could not get untracked at all Saturday.

In fact, top running back Jabez Tuaoa had six rushing attempts for minus-2 yards.

Henry Isackson, Owen Coomes and Jackson Marley all deserve a ton of credit for holding their own along the defensive line. But the Wolves’ four linebackers came crashing down hard to control things at, or near the line of scrimmage. And so did the team’s cornerbacks, especially Noah Weintraub, who is also the team’s placekicker.

“Coach (defensive coordinator) Jay Tully does such a good job with our backers and getting them triggered when we see a quick pass, that we are going hard,” Snell said. “And Noah … he made a couple of plays today where I was like, ‘That is not a normal kicker making that tackle.

“That part of our team is going to be so important, too.”

WHAT’S TO MAKE OF THIS KENTWOOD SHOWING?

It is difficult to forecast how competitive this game would have been if Kentwood wasn’t missing so many guys – to injuries and eligibility issues (none were COVID-19 related).

What is evident is that for this offense to gain traction, the Conquerors need a quarterback who can push the football up the field. All sophomore Joshua Crane (47 total passing yards) did was throw short passes in the flat (mainly to Omari Williams).

Getting big-armed Foster High School transfer Renat Mamikonyan Jr. back this week would certainly give the passing attack a boost. He goes through an eligibility hearing Wednesday.

Gill’s arm was in a sling on the sideline, and it does not appear the Conquerors will be getting their standout linebacker back soon.

“The whole point we schedule are season like this is to see where we are at – and hopefully be ready by (the playoffs),” Bush said.

WHICH LEAGUE IS REALLY DOWN – THE 4A KINGCO OR THE 4A NPSL?

In SBLive WA’s preseason top 50, the 4A NPSL had three teams in the top 32 – Federal Way (No. 32), Kentwood (No. 28) and Kennedy Catholic (No. 8). All three teams lost opening weekend, accounting for a total of one touchdown.

“I think (the KingCo) is back and stronger than ever,” Barrysmith said.

What is the biggest thing separating these two leagues right now?

“We have to get a better turnout from Day 1 moving forward so we don’t have to sit 15 guys.”