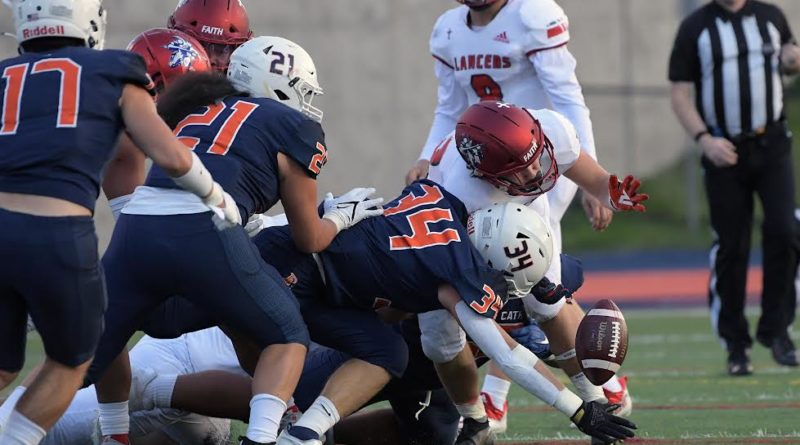 SAMMAMISH  –– Eastside Catholic football coach Dominic Daste knew it was going to be tough to replace some of the talent he lost to graduation in the class of 2021.

Nobody just replaces the likes of bullish defensive lineman JT Tuimoloau, the nation’s top recruit in that class.

But after Daste got the news of a positive COVID-19 test within the Crusaders’ program on the eve of Friday’s season opener against fellow football power Kennedy Catholic, even more plug-and-play operations began.

With 24 players out under COVID protocols, Eastside Catholic’s depth was tested and it passed with high marks, despite many players moving to unfamiliar positions. The host Crusaders put the clamps on Kennedy Catholic, a program known for offense under coach Sheldon Cross, registering a 23-8 victory to kick off the long-awaited 2021 fall high-school football season on Friday.

“The last 24 hours for us has been hard,” Daste said of his lineup juggling. “We had COVID positive test last night at 8:30 and it affected 24 kids, 10 starters. The defensive [coaching] staff and offensive staff jumped on (Microsoft) Teams at 11 o’clock last night to put together a new game plan.

“We had kids who played who had no idea they were going to play and in different positions.”

Here are four observations from the Eastside-Catholic-Kennedy Catholic game:

By the second half, the three starting linebackers for Eastside Catholic were missing from the field.

Two of them – dynamic Hunter Misa and David Lene – were casualties of COVID protocols and then third, Daley, was injured and exited the game in the second quarter.

“I’d love to say this is going to be a one-time deal [with players missing in COVID protocols] and be back to normal, but I think is going to be something we are fighting all season,” Daste said of not being a full strength. “We have to be super careful. Did we play great football at all times, probably not. I’ll say this, we played really, really hard all game. I think our defense is going to be special when it’s all said and done.”

Eastside Catholic defensive coordinator Marcus Ungaro and the assistant coaches translating his playing calling via video chat and relaying it to the field were worthy of “game-ball” status.

Ungaro, as part of COVID protocols, made the plays from home over an iPad to an assistant coach in the announcer’s booth at the game.

“We had someone upstairs with an iPad [pointing to the field] and [Coach Ungaro] watched the game from an iPad,” Daste said. “Then, we radio-ed his calls down to the field. You want to talk about all-out effort and a three-ring circus at the same time. That’s what it was.”

Daste could be seen video-chatting on his phone after the game with Ungaro, celebrating a season-opening win.

“I couldn’t be more proud of the team,” Daste said.

Junior quarterback Brady McKelheer looked confident and decisive in his first career start for the Crusaders, giving hope the a gradual upward swing with more starts.

McKelheer, the 6-foot, 170-pounder, opened the team’s first series by directing a five-play, 54-yard scoring drive and capped it with a dart of a 24-yard touchdown strike to an in-stride Dallas Daley in the back left corner of the end zone. That play gave Eastside Catholic a 7-0 early and they stretched to 16-0 before Kennedy responded.

“That’s a proud, championship team that’s won multiple state championships,” Cross said of the Crusaders, who have won the last two 3A state titles in 2018 and 2019 after the pandemic wiped out the 2020 postseason. “Hats off to Dom Daste to get those kids ready to play. Their quarterback Brady (McKelheer) made some big throws when he had to. They really did a helluva job against us up front.”

McKelheer was an efficient 13-of-21 passing for 107 yards, a touchdown and no interceptions.

MORE DEFENSE THAN OFFENSE IS ODD FOR KENNEDY CATHOLIC

If Kennedy Catholic plays like it did on defense on Friday, it will stay in a lot games against top opponents. However, the offense, which the Lancers are known for, needs to make a jump.

Junior linemen Ish Taliauli and Micah Banuelos both made a handful of big plays on defense. Taliauli had a fumble recovery midway through the third quarter to give the Lancers hope while trailing 16-8.

Kennedy Catholic looks like it can lean on this defense and will need to if the team’s Air Raid offense sputters some, transitioning to its newer pieces.

“We had the best passing offense in the history of Washington high school football,” Cross said. “I think we’re going to keep getting better.”