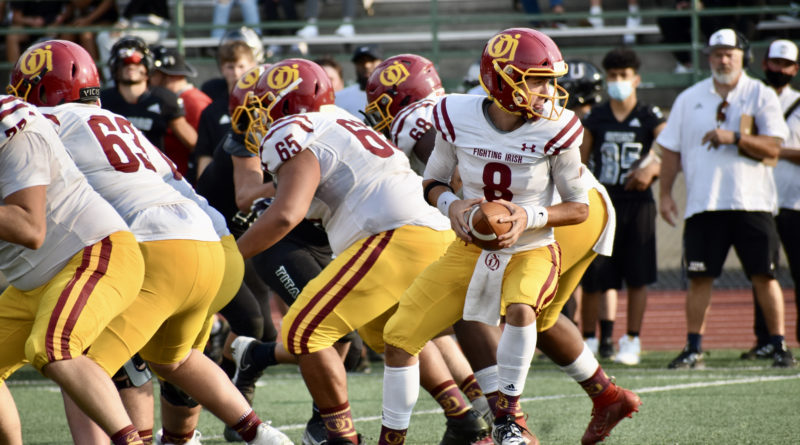 VANCOUVER, Wash. — Jason Brown’s first-hand experience running behind the tall trees that populate O’Dea’s offensive line can be summed up in one word.

If Brown’s opening week performance wasn’t divine, it may not have been far off. The highly-touted sophomore turned 23 carries into 284 yards and three touchdowns to lead No. 1 O’Dea (3A) past No. 4 Union (4A) 35-17 on Friday afternoon at McKenzie Stadium.

But the Fighting Irish pulled away in the fourth, thanks to a 42-yard touchdown pass from QB John Kohler to Tucker Ashcraft, then a three-yard punch-in TD run by Kohler in the fourth.

“I was really proud of the way we battled,” Union coach Rory Rosenbach said. “I told them, I said ‘fellas, those guys will be playing on Thanksgiving. They’ll be playing in December. You know what you’re made of now.’ ”

O’Dea controlled the game the way it likes: by wearing its opponent down

In the first game of the shortened spring season, O’Dea, SBLive’s preseason No. 1 team in the state across all classifications, came out flat.

In a 20-0 loss to Eastside Catholic, the Fighting Irish played flat — and couldn’t get anything going on offense. Though teams had just days to jump-start practice to prepare for a season that spent months in limbo.

“I think we were thinking we were better than we were,” O’Dea coach Monte Kohler said on Wednesday. “I think this group knows that they’ve got to work.”

Kohler blamed himself for the team’s lack of preparedness. When he got the chance to learn from it, they did.

O’Dea controlled the line of scrimmage on Friday night. They ate up lots of game clock with long, methodical, run-heavy drives, like its more than six minute drive to open the game. And when Union pulled within four late in the third quarter, O’Dea responded again and again.

Rosenbach felt his team, vastly undersized on the line, was worn down by game’s end.

“(O’Dea is) pretty relentless in what they do,” Rosenbach said. “They will not be deterred.”

No sophomore slump for Brown

As a freshman, the 5-foot-10, 185 Brown did something freshman don’t often do under head coach Monte Kohler. He played — a lot.

If there was such a thing as a sophomore slump in high school, Brown doesn’t qualify.

His electric burst and hard-nosed running style was on full display Friday. He rushed for touchdowns of 21, 80 and 22 yards and had another long run called back with a flag in the game’s final minutes.

Brown put O’Dea on the board, and kept his team ahead with well-timed bursts through the defense. While stuffing the stat sheet, and asserting himself as a thorn in the side of Union’s defense, his offensive line couldn’t help but root him on.

“That’s greatness right there,” O’Dea senior lineman Mark Nabou said. “That’s a prodigy right there … it puts a smile on my face. That’s it.”

Union two-way lineman Joel Lee had a one-word reaction when asked what he saw preparing for O’Dea on film in the days leading up to Friday.

The Fighting Irish’s vaunted front is led Mark Nabou, a third-year starter and at 6-foot-4 (without cleats), 330 pounds, a high-major Division I target. Center Oliver Braitsch and guard Jonias Utu are also returning starters, and leaders of a line that introduce several new starters on Friday.

The standout, though, was Nabou. He was a menace on defense, sacking Union quarterback Dom Colletto twice, and forcing the Union QB out of the pocket on more than one occasion.

O’Dea quarterback John Kohler has high praise for his line. The product on the field Friday, he said, was a byproduct of Thursday hill sprints at Cherry Hill in Seattle. Each position group ran anywhere between 12 and 22 hill sprints together, depending on the week.

“That’s what bring us together,” Kohler said. “Everyone runs it, everyone finishes it, and we all puke together.”

No, they didn’t talk about Dom suiting up for Jack’s bitter rival. The elder Colletto is a former standout Camas QB/DB and 2016 state 4A player of the year.

Jack had advice to give his younger cousin entering his first varsity start.

“Going into big games, after big games, when you have success, failures,” Dom Colletto said, “his biggest thing was find the balance between effort and ease, having fun but still being focused.”

And on Friday, his first go as the Titans’ new signal-caller against a perennial state powerhouse was up-and-down. His early interception and offensive sputters were offset, in part, by timely playmaking and and an offense that seemed to find its rhythm as the game progressed.

He connected with Notre Dame commit Tobias Merriwaether on a screen pass, who exploded through the defense for a 65-yard touchdown to bring Union within four in the third quarter.

O’Dea’s biggest concern preparing for the Titans was limiting their many playmakers. That starts with Merriweather, who is among the country’s fastest receivers.

Merriweather’s 65-yard touchdown in the third came when Union’s offense was lagging. It was the first drive of the second half, at which the Titans trailed 14-11. Facing third and 12, Rosenbach called for a screen pass to his lightning-fast wideout.

“We needed that play to get some juice going,” Rosenbach said. “We hadn’t had that play, where we were like ‘we can do this.”

In need of a spark, one of Rosenbach’s assistant suggested some trickery late in the third. He obliged, and Merriweather came through again, scoring on a 12-yard reverse end-around on the left edge.

“That was nice,” Rosenbach said.