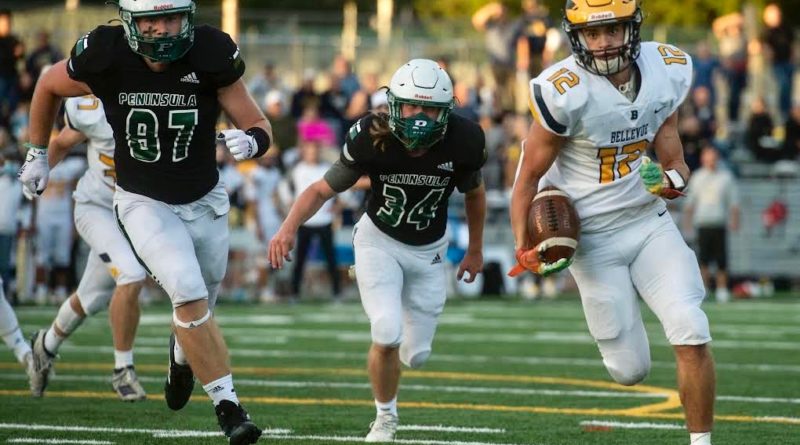 PURDY – Bellevue ran over (and around, and thru) the Peninsula Seahawks on Friday, the first full night of high school football’s fall return to stadiums in Washington after a two-year absence.

The non-league contest began as a pairing of preseason 3A playoff contending teams. It concluded with a 51-13 blowout for the visiting Wolverines at Roy Anderson Field.

Bellevue scored the first five times it had the ball, and added a sixth touchdown defensively with a 24-yard interception return on the first play of the third quarter, to run away with this one.

The Wolverines amassed 445 yards of offense, all on the ground. They ran the ball on 60 of 61 offensive plays, led by William Wang’s 14 carries for 110 yards and two touchdowns – all in the first half.

Bellevue built a 28-0 lead by the half, and sent the game into a mercy-rule running clock with nine points over the first half of the fourth quarter.

First, the Bellevue defense sacked Peninsula quarterback Jake Bice in the end zone for a safety with 11 minutes, 38 seconds remaining to extend its lead to 44-6. After the Wolverines ran five minutes off the clock before missing a 46-yard field goal on the ensuing possession, Casper Rublowsky recovered a Bice fumble on a bad snap at the Seahawk 15-yard line.

Two plays later, Bellevue scored again to make it 51-6 and invoke the running clock for the final 5:53.

Wang may have felt like the featured running back on Friday, but nine different Wolverines had at least one carry in the game.

“It’s crazy, you know,” senior running back Chase Taylor said. “We don’t have any backups. Every single player is the first player. Is the No. 1. When the second player comes in, he’s not a backup. He’s a starter. We’ve got nine starters.”

Taylor enjoyed his own big game on both sides of the ball. He ran it eight times for 50 yards and a touchdown, and he had the pick-6 interception of Bice to open the second half for his second score.

Both sides made sure it was known. This was just a single game in a much bigger endeavor.

They came at it from different perspectives, of course, with the Bellevue coaches telling the team after the game to remember, “1-0 is only a part of the goal.” The Wolverines mentioned how difficult accomplishing state championships really is.

For the Seahawks, the message was not to let this one linger.

“Humbling,” Peninsula coach Ross Filkins said. “We really had to go through some things there, especially in the first half. None of our kids quit and we certainly improved there in the second half. We’re going to have to take our lumps here and get better.”

Despite the lopsided loss, Peninsula’s fate remains in its own hands.

“We’ve got playoffs,” Bice said. “And I know we’ll be there for sure.”

The Wolverines just kept pounding away on the ground. Their offense more than resembles the style that made Bellevue the program that was a virtual playoff lock every season for two decades, a state title contender if not a favorite, and a team recognized nationally.

“Our guys have worked a long time for this,” Bellevue coach Michael Kneip said. “They’ve worked really hard during the summer, they’ve worked hard during two-a-days and it’s just fun to see our seniors enjoy and have fun.

The Wing-T offense that amassed 294 yards and four TDs on 41 carries in the first half, and the defense that held Peninsula to just seven rushing yards on nine carries over the same two quarters, was noticed on both sidelines.

“It’s difficult to get a scout team to replicate that offense, particularly in a Week 1 game,” Filkins said. “I really feel like they’re doing the right thing. That’s how Bellevue built that program. I respect that and we knew it coming in.”