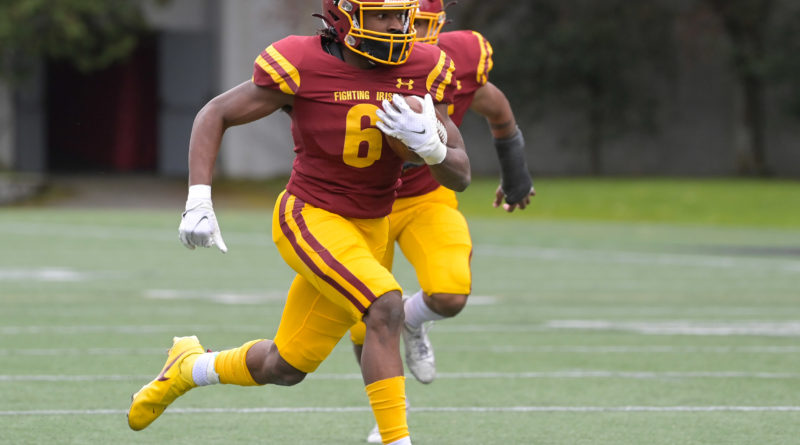 High school football is back. The first games kick off opening weekend of the Washington prep season on Thursday, run through Saturday and feature a wide range of compelling matchups.

Mason Hayes will start as Kennedy Catholic’s day one QB in the post-Sam Huard era, preseason 3A favorite O’Dea hits Interstate 5 southbound for Vancouver to take on 4A Union and two sets of potential 3A contenders will play one another opening weekend.

SBLive Washington broke down five games to watch, storylines to follow and made predictions:

NO. 5 KENNEDY CATHOLIC LANCERS (4A) AT NO. 8 EASTSIDE CATHOLIC CRUSADERS (3A)

About Eastside Catholic: Even the best programs don’t typically cycle through as many recruiting stars worth of talent as the Crusaders did over the past two years. Now, after a less-than-satisfying spring season that ended with losses in three of the last four contests, the Crusaders return a team with a much different look. Four-star linebacker Dishawn Misa, a third-year starter, spent the summer recovering from nagging injuries and is now healthy. Sophomore David Lene and senior Dallas Daley round out that strong linebacking corps, Drew Sanidad and Nico Ursino bring experience and football smarts to the secondary and the D-line will be built around Peter Taoipu and Gabe Hoffman. Offensively, junior pocket passer QB Brady McKelheer faces a big test in his first start against a stout Kennedy D. (Read Eastside Catholic’s team preview)

About O’Dea: In the words of coach Monte Kohler, O’Dea lives and dies in the trenches. Though most of its line graduated, it returns its typical size and talent. Nabou, Jonias Utu, senior center Oliver Braitsch and imposing underclassman Isendre Ahfua lead the way for run-heavy O’Dea and breakout star underclassman RB Jason Brown. The Fighting Irish will be strong on defense, but what will a unit with nine new starters look like in Week 1? (Read O’Dea’s team preview)

About Union: Opposing defenses will have to take gambles scheming to stop the Titans. Do you send extra attention at speedster Tobias Merriweather, and risk leaving slot receiver Marcus Cantu, wideout AJ Attaran or RB Jaydon Jones open out of the backfield? Or do you make Merriweather, who considers himself the nation’s best route-runner, beat you one-on-one? Union’s offensive fire power is palpable, and it hinges on its QB1. Newcomer Dom Colletto, whose arm talent has impressed coaches over the summer, will make his first varsity start, though hard-running Tyson Fuehrer and sophomore Mitch Ratigan could also see time. (Read Union’s team preview)

Nugget: The last time these teams played was 2011 in a district crossover. Lincoln won, 40-13.

NO. 4 BELLEVUE WOLVERINES (3A) AT PENINSULA SEAHAWKS (3A)

Nugget: These teams last faced one another in the 3A state quarterfinals in 2014. Bellevue’s 31-7 win still stands, but its second place state finish that year was vacated by the WIAA in 2018.

About Bellevue: Continuity year over year helps in any program. That advantage extends to Bellevue and its vaunted Wing-T. Three-year starters on the O-line Peter Netelenbos and Elliott Hamilton, full back Williams Wang and Division I target Hogan Hansen (TE) are among the 15 total starters returning. Ishaan Daniels, a three-star per 247 Sports, gives the Wolverines speed around the edges at wing back, as well as corner. He’ll lead a defense that coach Michael Kneip believes is his best in his three and a half years at the helm. (Read Bellevue’s team preview)

About Peninsula: The Seahawks have made seven of the last eight playoffs and and rolling in Ross Filkins’ 22nd year at the helm. Sure-handed QB Jake Bice returns under center with a grizzled O-line in front of him, led by Boise State commit Hall Schmidt and all-league pick Taylor Jones. Peninsula will be physical and able to match Bellevue’s size. Offensively, there are big shoes to fill with the departure of bruising running backs Sean Skladany to Eastern Washington and Landon Sims to Hawaii. Filkins will turn to one-two punch of speedster Connor Burton and power back Josh Hinkel to helm the ground game. (Read Peninsula’s team preview)

Nugget: Rematch of the 2018 2A state championship game, where Hockinson won 42-37 to nab the first title in program history — the first of two in a row.

About Hockinson: A new era has begun. Clint LeCount moves from defensive coordinator to head coach. He replaces Rick Steele, the school’s first football coach when it opened its doors who brought it two state titles. LeCount called the defense both those years, and as he takes over, plenty remains, including every assistant coach from last year, three-year starter Cody Wheeler, league MVP Andre Northrup and standout hard-hitting junior linebacker/wideout Tyler Litle. Second year starting QB Jarod Oldham holds the keys to the offense. With the size and skill returning on defense, opposing offenses should have a hard time moving the ball on the Hawks. (Read Hockinson’s team preview)

About Lynden: Expectations are high within the perennial 2A power, though much remains to be seen. Nine starters return on what was already a strong defense that features Taivin VanDalen, son of coach Blake VanDalen, at inside linebacker and Max Moore at free safety. After a string of injuries, Moore turned heads during summer scrimmages and earned the spot as the team’s starting QB, addressing its biggest offseason question mark after Baylor Ayres graduated. Between Isaiah Stanley, Collin Anker, a healthy Kaleo Jandoc and a two-pronged tight end group of Case Zweegma and Cade Slayton, the Lions have weapons out wide. (Read Lynden’s team preview)