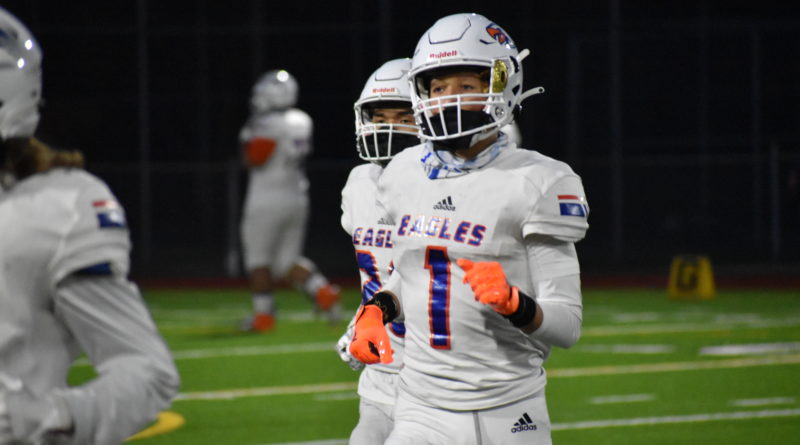 SBLive is previewing the Top 50 high school teams in Washington ahead of the fall 2021 season. Here’s an inside look at the Graham-Kapowsin Eagles of the 4A SPSL – the No. 1 team in our countdown.

It’s not just the tireless work rate, or the nasty edge these Idaho State-bound twins showcase in their play – they also keep teammates in check.

A year ago, most knew Wood as a high-level point guard in basketball. Now, he is being mentioned as one of the top signal callers in the state.

Top-ranked Graham-Kapowsin has been building for this.

The Eagles have performed at a state level for many years. They have been in the Class 4A playoffs for 15 consecutive years – and have reached the state quarterfinals in the past three seasons (when WIAA playoffs were active).

But now – the undisputed state favorites?

“Everyone can say we are preseason No. 1, but we have to show it on the field,” Graham-Kapowsin coach Eric Kurle said.

The Eagles are loaded everywhere: Joshua Wood gives them a bona fide dual-threat star at quarterback (even after just one season as the starter); both lines rotate a bevy of college-bound recruits, led by left tackle Vega Ioane (UW) and twin defensive-tackle brothers Curtis and Hunter Hill (Idaho State). And not only is Julian “Juice” Mason a legitimate No. 1 wide receiver, he will have inside-the-seams tight end transfer Andrew Savaiinaea to help take some of the attention away.

But it all starts with the cool-headed Wood – the reigning Northwest 9 Showcase senior-class winner.

“He is respected so much by teammates, and he can do so many things – passing, running and scrambling,” Kurle said. “And the biggest thing is he is such a humble kid. He’s a lot like (ex-G-K/current UW quarterback) Dylan (Morris) – a team-first guy.”

So, what is the team’s biggest question mark?

On defense, the Eagles have to replace middle linebacker Jonas Waugh. That role will fall to junior Jalen Davenport, who also leads a deep running-back corps.

While young, the secondary has plenty of speed, led by cornerbacks Myles Haywood and Stephen Mars, and free safety Jordan Woods.

“The chance to win a state title is the ultimate goal,” Kurle said. “But we need to build depth in the games we can. … so we might not have the (individual statistics) like in other years.”