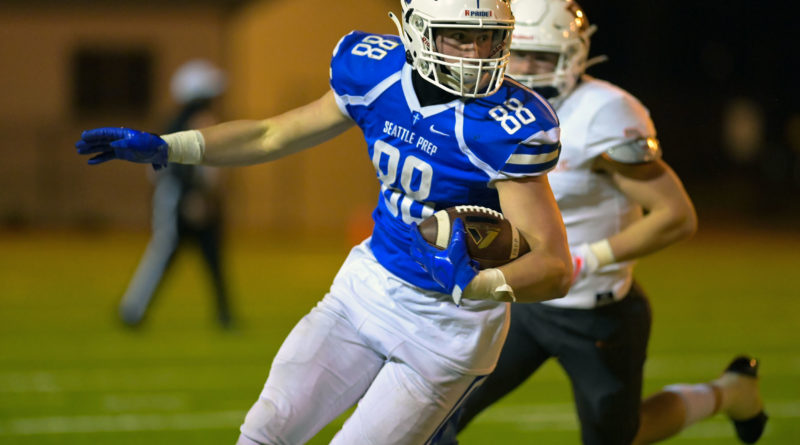 SBLive is previewing the Top 50 high school teams in Washington ahead of the fall 2021 season. Here’s an inside look at the Seattle Prep Panthers of the 3A Metro League – the No. 4 team in our countdown.

After missing his sophomore season with a quad injury, he asserted himself as a physical force in the middle of the defense. “He was lights out,” said Maul, who added Harnetiaux is also a leader in the weight room.

After two years of make-you-miss playmaking at wide receiver, the two-sport standout will step under center full-time and take control of the offense. An NCAA Division I prospect in both sports.

Oregon State commit is a strong downfield threat, a two-time first team all-Metro League selection and will be a favorite target as the most experienced returner in a new passing game.

Braeden Smith’s face especially was stern, stoic and mean on two separate occasions in the spring.

First, when he stepped in as a backup quarterback and helped lead Seattle Prep to first win over O’Dea in 41 years. The second came just two months, when his improbable buzzer-beater off of a stolen inbound lifted the Panthers past O’Dea to a Metro League basketball playoff championship.

As the dual-threat Smith prepares to move from standout wide receiver to the team’s full-time quarterback, Seattle Prep coach Aaron Maul is using those two moments as motivation.

“That’s the killer, that’s the dog you need to be,” Maul said he told Smith.

Still, a lot rests on the Smith’s shoulders. And that’s just how he likes it.

“He knows it’s on him, and everything in the offense is going to come through him,” Maul said. “Special things are going to happen when the ball’s in his hands. But we can’t just solely rely on Braeden to create things. It’ll be structured, intentional.”

The middle of the Panthers’ defense returns an experienced core, like linebackers Austin Harnetiaux, Isaiah May and Bill Vaouli Jr., but are still, by state contender standards, small on the offensive and defensive lines.

Another thing the Panthers have going for them: According to Maul and athletic director Sam Reed, 100 percent of the team — both coaches and players — has received the COVID-19 vaccine, which because of Washington State Department of Health contact tracing guidelines gives the team a competitive advantage in the case of a positive test.

Will Seattle Prep find ways to mitigate the impact of bigger teams like it did in the spring? Will that momentum from the spring carry into the fall?