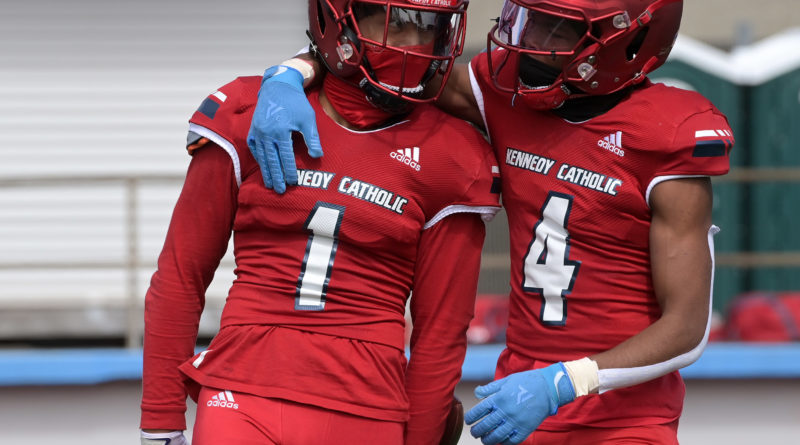 SBLive is previewing the Top 50 high school teams in Washington ahead of the fall 2021 season. Here’s an inside look at the Kennedy Catholic Lancers of the 4A NPSL – the No. 8 team in our countdown.

Arguably the most gifted in-state lineman recruit in the 2023 class, his nastiness has him at left tackle – but long term he will likely shift inside.

In the secondary, Kieran Collins (CB) can cover, Xe’ree Alexander (SS) can hit – and Malloe can do it all by covering so much ground in a flash.

He is in the shifty-like-Justin-Baker role, which means he will operate in short space, and break away down the field. Could have 90-100 catches.

With Kennedy Catholic’s holy passing triumvirate – quarterback Sam Huard, and wide receivers Junior Alexander and Jabez Tinae (and don’t forget about Reed Shumpert, and Justin Baker before all of them) – now in the Pacific-12 Conference ranks, the natural assumption is that the Lancers will take a step back offensively this fall.

Yes in the sense that Huard and company represented a generational collection of record-setting talent. Defenses feared (and respected) them – so much that coach Sheldon Cross said he lost count on how many junk defenses he has faced over the past few seasons. Huard left as the state’s all-time leading passer in yardage (13,214 yards).

Kennedy Catholic’s offense did not shrivel up and die after Huard left to enroll early at the University of Washington. Then-sophomore Mason Hayes came in and passed for 949 yards and 15 touchdowns in leading the team to three victories.

“We are excited about the way Mason played in those three games,” Cross said. “Everyone forgets, this is Year No. 3 in the offense for him as a junior. He sat behind and watched and practiced with Sam, and he really understands what we are trying to do.”

Even if the offense isn’t putting up the same juggernaut numbers, the Lacners returned eight starters on defense, including one of the most talent-rich secondaries in the state.

Rangy cornerback Kieran Collins is due for a bounceback senior season after being slowed by injuries in the spring. Strong safety Xe’ree Alexander – the younger brother of Junior – is sort of the Kam Chancellor of this “2013 Seahawks” 4-4 scheme, and has really risen this summer. Free safety Isaiah Malloe, the son of co-UW defensive coordinator Ikaika Malloe, plays like he’s grown up in a film room. His smarts are off the charts.

“Our secondary is so good,” Cross said.

With Kentwood and Federal Way pushing through its young talent, this has the makings of one of the most competitive 4A NPSL seasons since … well, before Huard and company hit their stride.