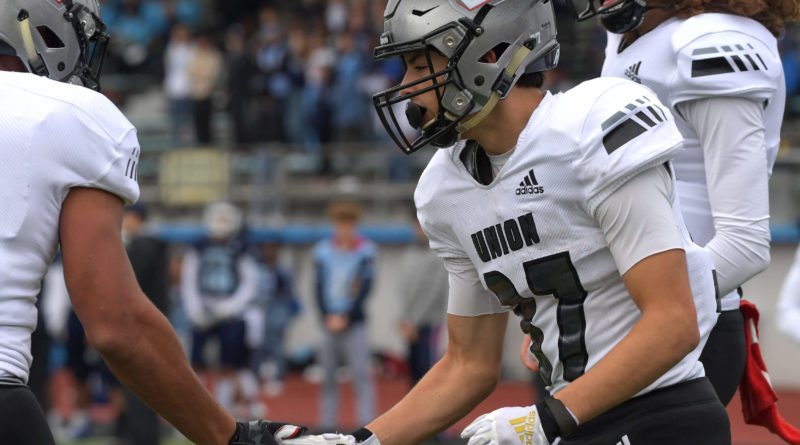 SBLive is previewing the Top 50 high school teams in Washington ahead of the fall 2021 season. Here’s an inside look at the Union Titans of the 4A Greater St. Helens League  – the No. 7 team in our countdown.

Consider his 200-plus yards receiving in the final game of the spring a precursor. Quick, speedy slot receiver has made a living turning short-yardage receptions into big-gain plays over the past two seasons.

Made a strong impression after he held his own against an NCAA Division I lineman in his first start in 2019. Now, the third-year starter at left tackle is a leader in the weight room – and on a line that boasts potential.

Four-star Notre Dame commit is one of the fastest prospects in the country. Averaged more than 70 receiving yards per game over the past two seasons and simply must be accounted for at all times on the field.

Tobias Merriweather was a ninth grader playing under the bright lights in the Tacoma Dome when Union won the 4A state title in 2018.

Quietly, he studied the way the leaders of that team — Washington State’s Lincoln Victor, Portland State’s Darien Chase and Jojo Siofele and Northern Arizona’s Alishawuan Taylor — went about their business each day.

The Notre Dame commit kept them front of mind as he prepares for his senior season as one of Union’s core leaders.

“I’m in the last class that knows what it takes to get to the (state title),” Merriweather said. “That’s what I want my legacy to be … the next class, and the class after that, we’re going to show them what it takes.”

Union’s strengths — speed and skill — are as imposing as any team in the state. And its question marks are draped in promise. Secondaries can’t key too closely in on Merriweather, lest three-year starter Marcus Cantu out wide, or senior running back Jaydon Jones out of the backfield.

The Titans replace four starters on the offensive line. Three-year starting tackle Joel Lee will be tasked with leading a group that has experience in the rotation, but not in the starting lineup.

“Years past, I’ve had Jack Grimstead, Mania (Fuerte), they’ve taught me the ways of working through hard things,” Lee said. “They put me through this, and I’ve got to put others through it now.”

The biggest question all summer was under center, and who would be replacing Alex Gehrmann? All three involved in the the position battle bring different things.

Colletto (cousin of Oregon State standout and former 4A state MVP Jack Colletto, of Camas), a junior transfer, boasts superb arm talent. Junior Tyson Fuehrer, also a linebacker, can take off on his feet. And sophomore Mitch Ratigan has also impressed as a possible future fixture.

Rosenbach said Colletto will start opening weekend against O’Dea, but could play all three options.

There’s no time to slow-roll the start of the season. Union’s schedule that consists of three perennial state playoff teams in O’Dea, Mountain View and Chiawana, and the other usual 4A GSHL contenders in Camas and Skyview.