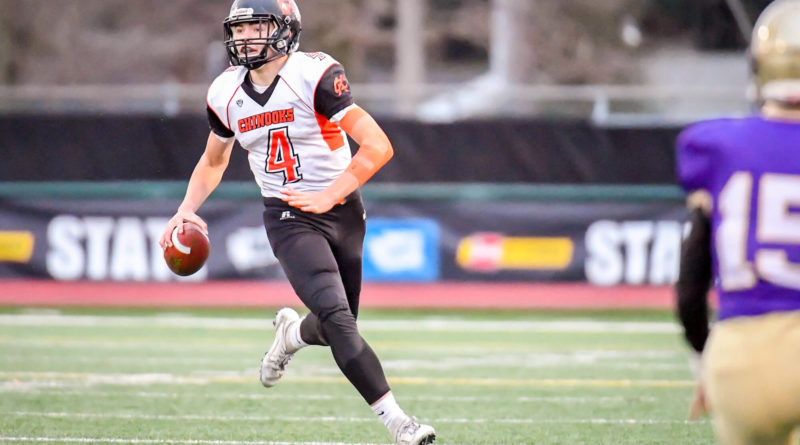 It was 2018, his ninth grade season, and he was running a flat route during a non-league game against Woodland.

As he cut and accelerated going along the line of scrimmage, Tyler Flanagan – Woodland’s lumbering former two-way standout – cold-clocked him and sent him careening onto the turf.

“He absolutely rocked me,” Esary said. “That was my ‘welcome to varsity’ moment. Ever since that, I’ve never been nervous.”

Three years later, Esary enters his season season as one of the most dynamic athletes in the state, let alone 2B. As he reflects on his memories as a former tight end, he sees them as a barometer to understand just how far he’s come.

It’s one of the many things that gets Kalama’s standout dual-threat quarterback and linebacker excited for his final high school football season — the first full fall season in Washington in two years.

Days ahead of the Chinooks’ season-opener Friday – which is a full-circle calendar moment – at Woodland, the 6-foot-3, 210-pound Esary’s focus is as sharp as his goal is clear: three years after being a part of a 2B state title as a ninth grader, he’s determined to bookend his prep career with one more.

This time on his command.

Now, when he heaves the ball downfield, he notices the motion requires less effort. Whether rolling out of the pocket or standing under center, the senior has started to notice he can put more zip behind the ball with a shorter, more controlled flick of the wrist than in years past.

The upcoming season has also given Esary, a four-year starter — three years on both sides of the ball — a chance to get his mind off of what his future after high school holds.

Right now, he is uncommitted – with his only offer coming from Eastern Washington University.

The Eagles came at him during the spring season – one, in which, Esary passed for 1,105 yards (at a 63-percent clip), rushed for 610 yards and accounted for 19 total touchdowns in just five games.

Other Big Sky Conference schools have since reached out to him, and see him like the Eagles do – as a linebacker, tight end or H-back.

Esary’s preference is to play quarterback. And he wants college coaches to know he’s a more-than-capable college signal caller.

“Running the offense, having the ball in my hands, it just feels right,” Esary said.

His abilities extend well beyond the gridiron. He was the Central 2B co-league MVP for the Chinooks’ basketball team in the spring – averaging 24.0 points, 10.0 rebounds and 3.0 assists per game. He also spent much of the summer months playing in weekly AAU tournaments in hopes college basketball coaches saw something they liked.

And while his sole focus this fall is on winning a state football title, he’s hoping another productive full season will open more college coaches’ eyes to his abilities under center.

Especially for any coach who might think twice about him because of the size of his school.

“You can just see his arm strength, his ability to throw the football,” McDonald said.  “Then, of course, is the leadership aspect. And his ability to work his butt off for it … he’s a freak out there.

“You get him in front of a college O-line where he can sit in the pocket and actually pick teams apart, it’s going to be a whole other deal.”

This summer, Esary has been the tone-setter for the program – holding teammates accountable at workouts and always being on the field long before practice begins.

He’s had a long history with this team. Consider:

*As a ninth grader, Esary was simply too gifted of an athlete for McDonald to keep off the field. He ended up starting at tight end on a team that won a 2B state title.

*As a sophomore, he moved under center and thrived. Esary accounted for 4,455 total yards of offense and 50 touchdowns, helping the Chinooks reach the 2B state championship game.

But their bid to become the first 2B team to win three state titles in a row since DeSales (1997-99) fell short, losing to Onalaska, 48-30. Esary threw for 257 yards, and three touchdowns, and took a kickoff back 89 yards for a touchdown.

*Esary’s junior season was compromised by the COVID-19 pandemic, reduced to five spring games and no postseason.

“What’s fueling me is a state title,” Esary said. “That’s all I want at this point. Recruiting, it’ll come, but I want those state titles. I want two rings to end my senior year. That’s my goal, and that’s my team’s goal.”