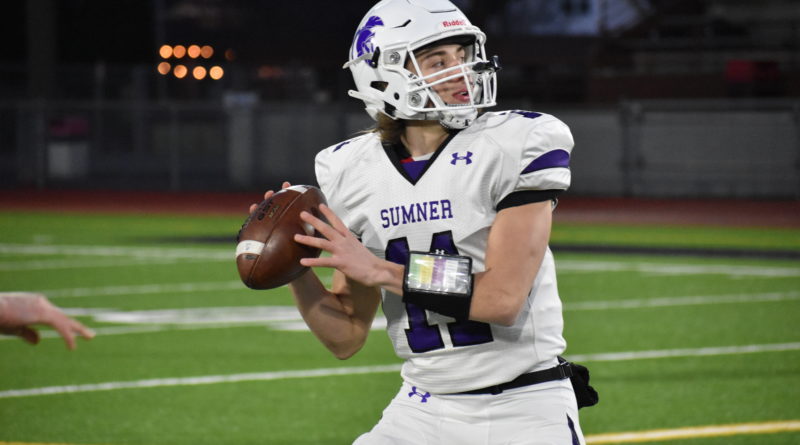 SBLive is previewing the Top 50 high school teams in Washington ahead of the fall 2021 season. Here’s an inside look at the Sumner Spartans of the 4A SPSL – the No. 10 team in our countdown.

The logger from nearby Carbonado has raw power in those running legs, and his improved passing mechanics have coaches excited.

The question about him shouldn’t be, “What is he?” – rather it should be, “What can’t he do?” Spartans want him to attack from everywhere.

Yes, the reigning spring 4A SPSL MVP might be the league’s best running back – but this is his best position as a big, athletic playmaker.

Keith Ross is no dummy. Like many coaches of Class 4A contending programs, he gives 4A SPSL rival Graham-Kapowsin the nod as the preseason state favorite.

But Ross is also cagey and competitive. For many of the same reasons why the Eagles are so well-respected this fall – his Spartans are very similar in many ways.

And they very easily could steal the show.

“We should be contending for a league title,” Ross said.

Defensively, this is deep, talented lineup at all levels – led by linebacker Peyton Wing, the 4A SPSL player of the year (74 tackles, 11 TFL last spring). He is flanked by Eric Buck (64 tackles last spring), who can also run and hit. Ross thinks these two seniors are as good any linebacking duo in the state.

Safety Tristan Dunn, one of the top recruits in the 2022 class, is a downhill freight train in the defensive backfield – one who is best when he just plays “backyard football” by reacting and coming downhill at ball carriers.

And a big reason why teams have such difficulty running on this defense is because of the plug in the middle – defensive tackle Andrew Tillett.

But in the past few years, what has held Sumner back is finding the end zone on offense.

The coaching staff is quietly bubbling about second-year starting quarterback Bo Carlson’s marked improvement as a passer – even after playing one three games last spring before suffering a broken thumb.

Carlson has added strength, and been working a ton on his mechanics with Sumner offensive coordinator Zach Coop.

“He’s now one of our strongest players, and he is tough,” Ross said. “He’s not spent a year learning the new offense, and we believe he can give defenses trouble … because he can run and pass.”