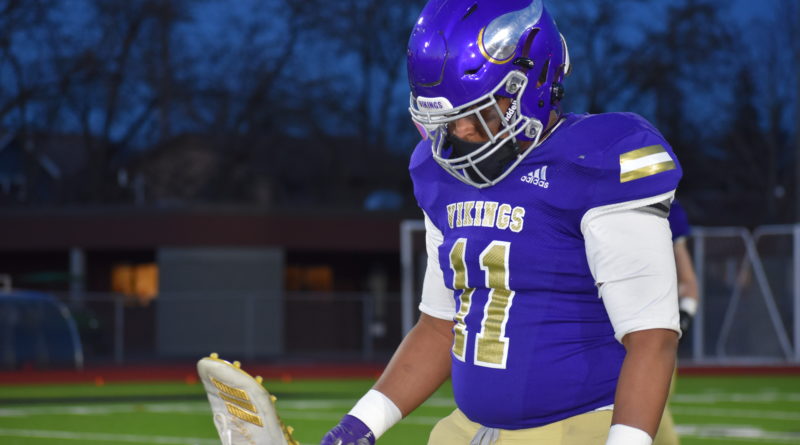 SBLive is previewing the Top 50 high school teams in Washington ahead of the fall 2021 season. Here’s an inside look at the Puyallup Vikings of the 4A SPSL – the No. 13 team in our countdown.

Coaches think there won’t be much of a dropoff under center with this well-schooled first-year starter – but he still has to prove it.

Can make a case he is the best pass catcher in the 4A SPSL; he has lateral quickness, straight-line speed and has hands of glue.

There is no better safety blanket for a new quarterback than having a massive-framed, fleet-footed athlete protecting the blind side.

Over the past three seasons, this team arguably has the best case to be named “best program not to win a state title.”

In 2018, one of the Vikings’ best squads in school history lost a close semifinal game at eventual 4A winner Union. A year later, they lost again to the eventual state champion, this time to Camas in the 4A quarterfinals. And last spring, they lost one game to the team many think is the heavy state favorite this fall – 4A SPSL rival Graham-Kapowsin.

Can Puyallup continue its extended run of success?

But there are a couple of new voices leading the way this fall.

First, Brian Grout takes over for Gary Jeffers as the new coach. He served as the team’s offensive coordinator the past three seasons, and also played for the school.

And for the first time since 2013, there won’t be a Holcomb brother – Nathaniel, Jacob or Luke – running the Vikings’ offense at quarterback.

The new trigger man is no stranger in the offseason 7-on-7 circuit – junior Micah Balzarini, who placed seventh in the underclassman division at the Northwest 9 Showcase earlier this month in Yakima.

“He has really started to distribute the ball accordingly this summer, and he’s gained confidence from that,” Grout said. “He has a strong arm, and while he might not be the same type of athlete as Luke, he might be a little quicker.

“Micah is a gym-rat competitor and he will be prepared.”

If that question mark suddenly becomes a big-time asset – the Vikings have a bevy of high-end pieces.

It all starts with seniors David Iuli and Tyler Lawrence, who might be the best bookend offensive tackles in the state. A left tackle, Iuli is a University of Oregon commit. A right tackle, Lawrence is also an NCAA Division I recruit.

Jordan Dwyer is a bona fide game-breaker at wide receiver, and Ziere Ford and Ryan Cramer can each be physical, workhorse running backs when asked to soften up defenses.

Key voices on the other side – notably edge rusher Sermon Wilson, linebacker Isaiah Moultrie and defensive backs Marquel Pressley-Thomas and Angel Sanchez – are gone. But coaches are quietly brimming over what rover Wyatt Gordon has shown in the offseason as a big-time breakout candidate who has battled injuries.

“He will be all over the field,” Grout said.