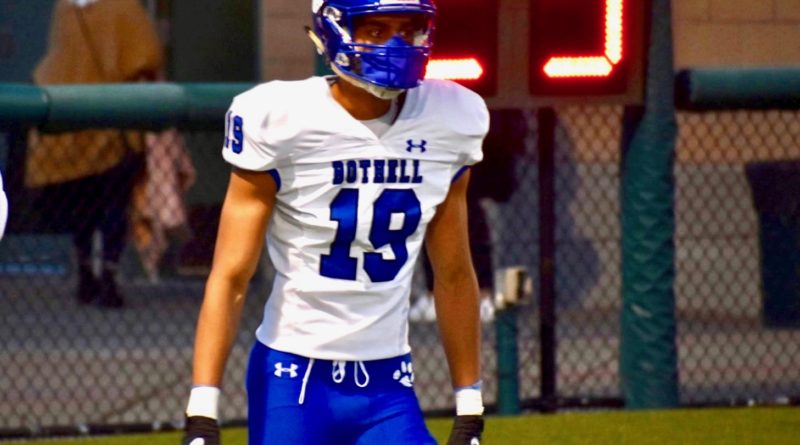 SBLive is previewing the Top 50 high school teams in Washington ahead of the fall 2021 season. Here’s an inside look at the Bothell Cougars of the 4A KingCo Conference – the No. 12 team in our countdown.

If the Cougars are, indeed, a little more conservative on offense, this would likely be the biggest heavy-workload beneficiary.

Defense will still be fast and aggressive, and if teams dare to throw in this guy’s direction – it might be a painful backfire.

Despite being relatively new to football, Oregon State commit quickly became leader of this deep group of blockers.

A former high school quarterback himself, Tom Bainter has been spoiled by the run of huddle-leader signal callers he’s had running his offense at Bothell.

The result has been annual runs at a league championship – and long stays in the playoffs, including winning the 2014 state championship.

But as the Cougars try and remain the 4A KingCo’s top dog, they have to find all-league first teamer Andrew Sirmon’s replacement heading into the fall.

As training camp opened, Bainter said as many as four quarterback candidates were under consideration, paced by Hawaii transfer Logan Lacio, a senior, and Danny Sirmon – Andrew’s younger brother – a sophomore.

Lacio did not arrive in Washington until the end of July – and did not even play on the high school team as a junior, opting out to train.

“He’s doing a great job trying to grasp all of it,” Bainter said.

Lacio will likely be under center when the Cougars open the season – all while the talented Sirmon gets more seasoning.

“This hasn’t been a frustration or anything,” Bainter said. “It’s been a fun challenge.”

What Bothell has on offense is proven returning depth along the offensive line, led by the left-side tandem of Luka Vincic (LT), an Oregon State commit, and Parker James (LG), a two-year starters. Both were all-league selections.

Auden James, Parker’s brother, is the center, and Rudy Podany and Noah Ochoa occupy the right side. All five were spring starters.

“The first day of practice, we could have put in 90 percent of our offense,” Bainter said. “They were ready to go.”

Bryce Kooy and Luke Olsen are names many don’t know about at running back, but they will – Kooy, especially, who is coming off a broken arm last spring.

“They both run physical and are tough,” Bainter said.

The defense will still fly around and is fast, especially in the secondary with Sam Stewart (CB) and Marcus Heffernan (S).

“We have a senior-dominated football team that has won, and been to a state championship game – and they want to get there again,” Bainter said.