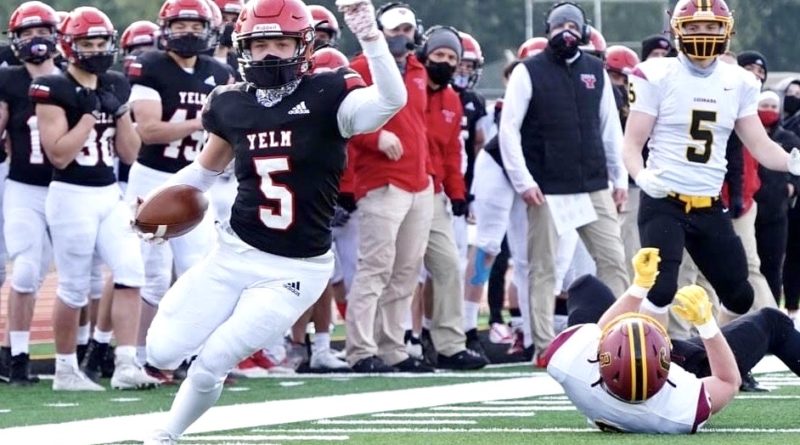 SBLive is previewing the Top 50 high school teams in Washington ahead of the fall 2021 season. Here’s an inside look at the Yelm Tornados of the 3A South Sound Conference – the No. 14 team in our countdown.

Versatile lineman whose speed and tenacity (coaches call it “spitfire”) allow him to excel across the line. Will move from right guard to right tackle, and may project best as a college center.

Asserted himself among the state’s top two-way playmakers in the spring as a sophomore, amassing nearly 800 total yards of offense and eight touchdowns in earning league MVP honors.

League defensive MVP (67 tackles, four sacks, 10 TFL, INT) as a quick, instinctual ball-carrier hunter. Since school has been out, his strength numbers have skyrocketed.

Yelm was one of the state’s most impressive bright spots in the shortened spring season, turning an undefeated run into a league title.

Expectations remain high — state championship-level high — but the Tornados didn’t spend the short offseason taking a victory lap. Instead, they had high attendance, competitive scrimmages and weight-room commitment all summer – under the pointed directive of their coach.

The message? The past don’t matter. Get better.

“Nothing in the past matters if you’re not willing to work,” Ronquillo said. “Obviously, success builds confidence, but we’re always trying to strive for more.”

The season also served as a passing of the torch of sorts, from a strong senior class to an early-blooming 2023 group.

Their spring run was preceded by a harrowing 2019 first-round playoff exit and a state quarterfinal run in 2018. Can this be the year the Tornados compete for a state title in a crowded 3A field?

The biggest area they must address is the offensive line, and how to replace Dylan Jemtegaard (now at Cal) and Slade Edwards (Central Washington). While Ronquillo says there are plenty of bodies to fill those spots, such as returning all-3A SSC first-teamer Kollin Gifford, who is moving to right tackle, and Landen Barger, a returning second team all-conference pick, their impact was felt most as leaders of the locker room and coaches on the field.

Also, there will be a change at quarterback. Nathan Paul, who saw snaps under center in the spring, will move back to wide receiver. Timberline transfer Palaina Hooper, a senior, is the favorite to win the job over sophomore Damian Aalona.

“Our athletes are hungry,” Jason Ronquillo said. “Once you tell them they’re a good athlete, they still want more.”