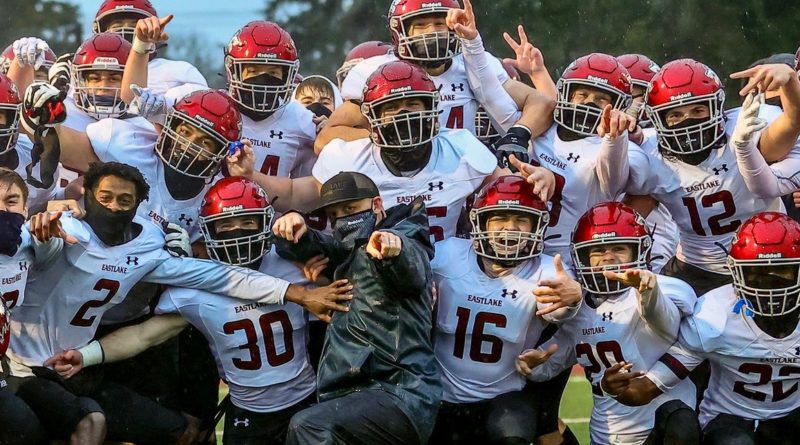 SBLive is previewing the Top 50 high school teams in Washington ahead of the fall 2021 season. Here’s an inside look at the Eastlake Wolves of the 4A KingCo Conference – the No. 19 team in our countdown.

The offseason scrimmage performer that opposing coaches consistently pointed to … was this slippery Eastlake signal caller.

This is a dude – in football and baseball. He is physical and can run, and is the anchor of the best unit on either side of the ball.

Third-year starter plays with incredible motor – and passion – for football, and could see time at any of the interior-line positions.

It’s never easy to replace someone so well-liked and respected as outgoing coach Don Bartel, but Kyle Snell thinks he has the pieces in place to keep the ball rolling in Sammamish.

Just drive by any field on the plateau during the summer, and you can see self-starting position groups from the Wolves’ program out working, and getting ready to battle for.a KingCo Crest title – and hopefully extended stay in the postseason.

“What has made this group so unique – they have spent most of the summer continuing to work on the field,” said Snell, who has been Bartel’s offensive coordinator.

And there is certainly a buzz surrounding this group from summer showings – led by first-year quarterback Parker Barrysmith.

Snell said the senior “is the most pleasant kid we’ve had at quarterback” – but don’t underestimate his on-field demeanor. He escapes trouble. He has a quick release. And the former baseball infielder has been known to change his arm angle to get a pass off.

“He makes all the throws we need him to make,” Snell said.

And he has a few playmakers to distribute the football to.

The one that Snell lists as a prime 4A KingCo breakout candidate is tight end/slot wide receiver Griffin Miller (also a linebacker), whose speed belies his hulking frame – and he has the hands to make tough catches.

Also, Will Eaton – son of former NFL defensive lineman Chad Eaton – is primed for a big season on the outside. And don’t forget about UW baseball commit Will Woodward, an elite athlete who will line up in specific packages as a first-year player.

The Wolves’ defense will be led by a quartet of experienced linebackers – seniors Logan Eller and Miller, and juniors Blake Borap and Harry Reid.