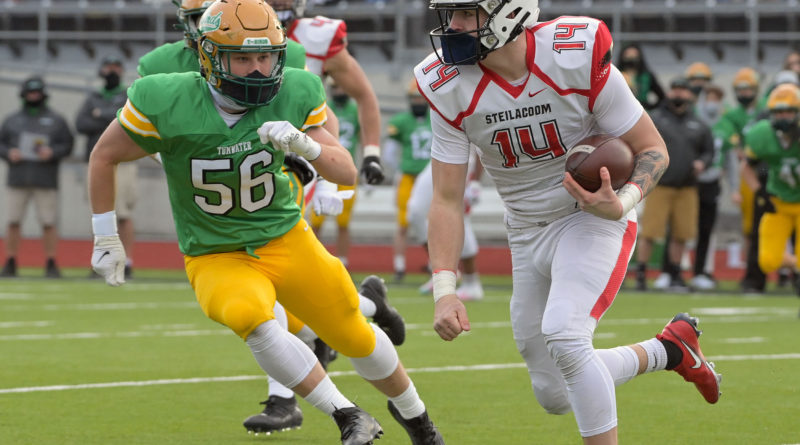 SBLive is previewing the Top 50 high school teams in Washington ahead of the fall 2021 season. Here’s an inside look at the Tumwater Thunderbirds of the 2A Evergreen Conference – the No. 23 team in our countdown.

As one of the state’s top pitchers, he knows how to battle through pressure – and had interception to seal 2019 title win.

Joining the UW as a tight end, but Tumwater will need his wing span to knock down passes, and get to the quarterback.

The most natural pass-catcher on the team, the Thunderbirds want to utilize his athleticism at wingback as well this fall.

It is the question everybody following Class 2A football wants to know.

When is it time for the green-jersey giants to fall back to the pack?

Heading into the fall season, it is apparent Tumwater needs ready-to-play reinforcements at key spots:

“One of the things we’ve learned over the years, and we tell your kids – we don’t have control over our ranking, or what people think about us,” Tumwater coach Bill Beattie said. “For us, it’s about building a new stepping stone. We will put the pieces of this puzzle together.”

Overbay’s returning health will have an impact on the offense. He gives the Thunderbirds a deep-passing element that Brady Prothero and Luke Reid do not.

“That kid has an arm … and is a flat-out athlete,” Beattie said. “Brady and Luke are almost identical in that they run the offense.

“The onus is on us to put personnel groups on the field that fit their strengths.”

Let’s not forget – the team still have a pair of NCAA Division I recruits going both ways in seniors Ryan Otton (University of Washington commit) and Austin Terry (Boise State), who are not only mismatches in the passing game at tight end (and Terry will also play some wingback), but they will still create pressure along the defensive line, primarily from the edge.

And three-year starter Ryan Orr, the league’s top baseball pitcher, is a stabilizing force at safety.

“Offensively, we will have some work to do … but I really like our defense,” Beattie said. “Our secondary will be good. Our linebacking crew has gotten better. And we might even have more depth than we’ve had on the defensive line.”