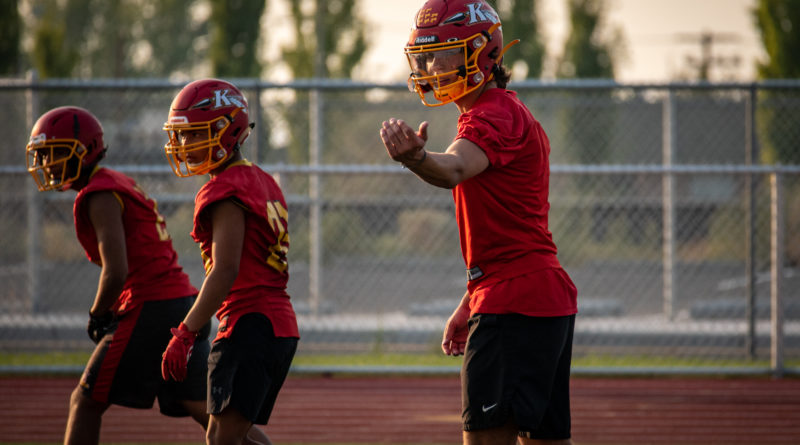 SBLive is previewing the Top 50 high school teams in Washington ahead of the fall 2021 season. Here’s an inside look at the Kamiakin Braves of the 4A/3A Mid-Columbia Conference – the No. 22 team in our countdown.

Luis Salgado, inside linebacker/running back

What can’t Salgado do? He’s the quarterback of the defense, will make you pay out of the slot and will shoulder a much larger load as the team’s running back, replacing two-time MCC MVP Tuna Altahir.

Emerged in a big way as one of the league’s top pass defenders as a sophomore – and with his big frame, strength and competitiveness – good luck trying getting big plays on this teenager.

Co-MCC lineman of the year is best as a pass rusher – and was recently cleared to resume activity after undergoing shoulder surgery. Also the team’s starting left tackle on offense.

Coach Scott Biglin isn’t one for grand statements or boastful hyperbole, so take up any questions as to whether Kamiakin might be approaching a down year after graduating several college-bound standouts with his returners.

“They’ve got a lot of swag,” Biglin said. “The chip on their shoulder is fun to be around. They’re not going to be scared of any situation.”

Kamiakin is listening, and determined to prove any doubters wrong – especially in a season that could see a wide-open championship chase among the league’s top 4A squads (Richland and Chiawana are the other two programs).

That starts with a linebacking corps that Biglin said “is going to be the best we’ve ever had” (again, consider his stance on hyperbole). The spring MCC defensive player of the year Luis Salgado returns as the leader of the locker room, as well as the linebacking corps that includes returning starters Kale Crawford and EJ Hawkins.

Salgado’s biggest adjustment will be on offense, where the more-than-capable rusher will move from a scat back-type to the team’s starting running back.

“He’s just a special player, one of the most pleasurable kids I’ve ever had coaching,” Biglin said.

Lockdown cornerback and Penn State target Gabe Tahir and Aidan Canada will see an increased number of targets out at wide receiver, which should give returning starting quarterback Henry Mercado lots of options — again.

The Braves won’t fill the trenches with hulking linemen, but they will be physical. League co-lineman of the year Aaron Tano is back as one of four returning starters back on the offensive line.