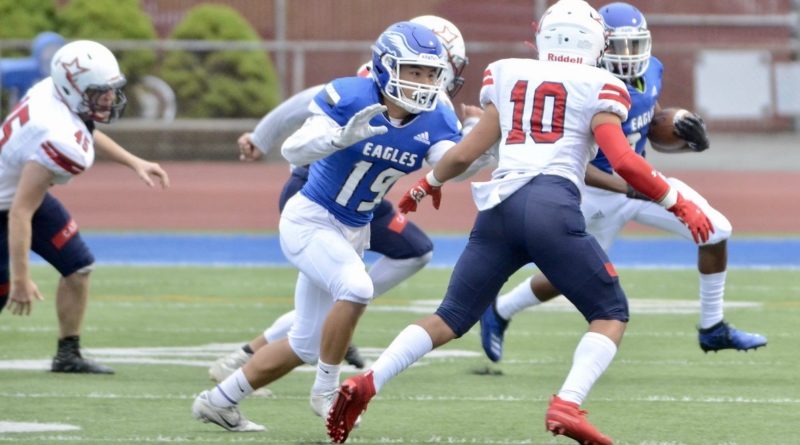 SBLive is previewing the Top 50 high school teams in Washington ahead of the fall 2021 season. Here’s an inside look at the Federal Way Eagles of the 4A NPSL – the No. 32 team in our countdown.

Dad (Kyle) was track star at Jefferson – and this teenager can cover ground and jump in same manner; eats up passes in middle of field.

Son of former Eagles’ coach moved from quarterback early in spring, and instantly became one of team’s best edge blockers.

Length and athleticism make him first rate, and in first extended action last spring, just gave up one long pass in six games for Eagles.

In his first season back with the Eagles, this time leading the program – Marcus Yzaguirre always seemed to be playing catch-up in getting this group headed into a different direction.

A lot of that had to do with stop-and-start COVID-19 restrictions, but the team also had to deal with a terrible tragedy involving one of its captains.

Once the season started, an unsettled Federal Way team went .500.

That shouldn’t happen this fall.

Now with his next-wave talent all on the same page, Yzaguirre sees the Eagles making a bigger push at a league championship.

And it starts with one of the state’s most talented defensive backfields, led by juniors Jaylon Jenkins and Andre Piper-Jordan.

“This is the best secondary I’ve had, and reminds me of 2013 when I was at Federal Way as an assistant – and we had all those dudes who went off to college,” Yzaguirre said. “But these guys here now are defensive backs first. That is what they will play in college.”

Piper-Jordan will play all over as a shutdown cornerback – but his teammate on the other side isn’t too shabby, either in sophomore Rahshawn Clark, a transfer from Life Christian Academy who was the 1A Nisqually player of the year last spring.

Jenkins is the typical center fielder in free safety, reading the action and then reacting quickly.

Pierre Cole, a transfer from Mount Rainier, will play rover and strong safety, giving the Eagles four athletes who can run and defend the pass.

On offense, Roman Hutchison and Jenkins will be the top pair of pass catchers, and tight end Max Meagher is emerging as a viable threat, too. The question is – who will be throwing passes. The starting battle is between Jay O’Neill and Anthony Tucker.

“I like how balanced we are,” Yzaguirre said. “We’ve got lots of speed and skill.”