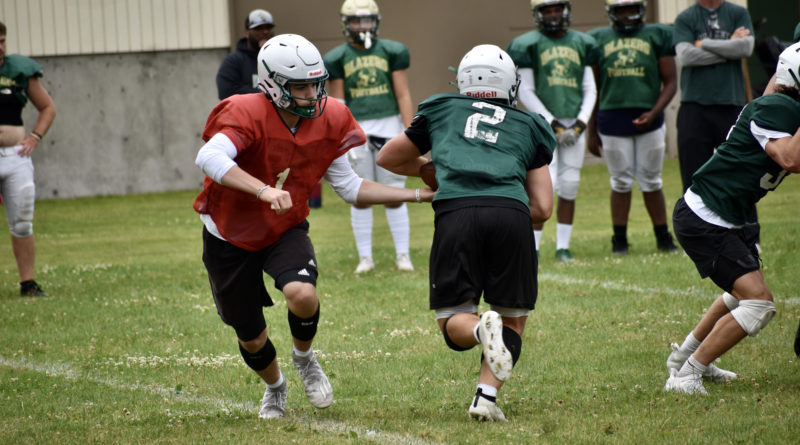 SBLive is previewing the Top 50 high school teams in Washington ahead of the fall 2021 season. Here’s an inside look at the Peninsula Seahawks of the 3A South Sound Conference – the No. 38 team in our countdown.

The Seahawks’ offense purposely limited Bice in the run game during the spring to preserve him, but look out — the proven pocket passer is going to flash his wheels. Also the team’s punter.

At 5-11, 200 pounds, Hinkel is physical, boasts agile feet and will be tasked with leading a linebacking corps that has been a strong suit for the Seahawks, and must replace D1 products Sean Skladany and Landon Sims.

Massive-framed Boise State commit headlines an offensive line that returns just about everyone. Was a 4A SPSL all-league pick at left guard last spring, but has moved to right tackle this season.

If you’re wondering what Peninsula gleaned from a shortened spring season when it was temporarily reassigned in the pandemic to the 4A SPSL league,  perhaps the state’s deepest 4A gauntlet, just ask coach Ross Filkins.

“Tremendous for us, particularly our young players,” Filkins said. “We’ll go anywhere … we’re OK winning and losing – we know how to handle both of those.”

The Seahawks have done their fair share of winning as the mainstay atop the 3A SSC. There’s no indication that will stop.

That’s music to the ears of Jake Bice, the second year starting quarterback who asserted himself as a passer in the spring, and will run more now as Peninsula expands its playbook for him.

Peninsula has earned its living with a strong run game, and must replace outgoing power running backs Landon Sims (now at Hawaii) and Sean Skladany (Eastern Washington). It turns to a new stable, headlined by power runner Josh Hinkel (also the inside linebacker) and speedy sophomore Connor Burton.

The Seahawks are on a crash course for an Oct. 22 showdown with Yelm, which could determine the SSC winner.

And playing a full season for the first time in two years isn’t lost on them after losing nearly a year of football to COVID-19. They’ve come to appreciate “just how precious every day is.”

“We all got a point where we were taking things for granted,” Filkins said.