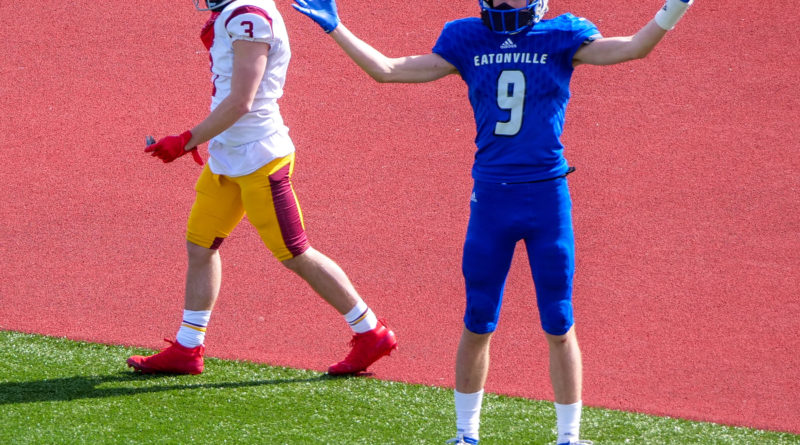 SBLive is previewing the Top 50 high school teams in Washington ahead of the fall 2021 season. Here’s an inside look at the Eatonville Cruisers of the Evergreen 1A – the No. 41 team in our countdown.

The 2A SPSL offensive lineman of the year as a sophomore might be a household name one day. The intelligent, reliable 6-6 lineman is a difference-maker in the trenches at left tackle.

Jump-out-the-gym athlete was a first team all-league pick at wideout after catching 10 touchdowns, and averaging 23.6 yards per reception. He is the coach’s son – and is far more athletic.

Two years after returning to the Class 1A ranks, Eatonville finally gets its first shot mounting a playoff run across a full season. And, boy, does it have a strong shot. The Cruisers bring back enough to seriously challenge two-time defending state champ Royal’s death grip on the 1A classification.

The Cruisers went undefeated in a localized 2A SPSL. Their one loss was to talent-laden Yelm (3A), a team it could have reasonably beat.

“Our kids, our community realize we have a really good group coming back,” Kralik said. “Everybody who’s poured into this program realizse the program has improved each year. People are excited for the season.”

Standout QB/TE/DL Caden Jumper is now at UW, and senior Kevin Wulff will step in at quarterback in his absence after completing 67 percent of his passes and tossing seven touchdown passes in two games last spring.

It’s unclear if Kralik learned this during his tour across Texas – and later the country – writing two books about how the nation’s high school football programs become so well-oiled. But the Cruisers have a weight-room culture that might be unparalleled across the state.

It’s demonstrated by its stout offensive line, where reigning 2A SPSL lineman of the year Kyle Cox, 6-5, 275-pound right tackle Tristan Lewis and two-time first team all-league center Julian Evans will pave the way for a stable of seven capable running backs (with no clear starter, per Kralik).

The most important piece to Eatonville’s state title aspirations is its depth. Players will seldom play both ways, Gavin Kralik said. That should give the Cruisers an advantage coming back to the Evergreen 1A League to play the likes of Montesano and Hoqiuam.

Challenging themselves with a daunting non-league slate, then following it up with a league stretch where teams will be going after them, the question is, does Eatonville have enough to knock two-time defending state champ Royal?

“Obviously everyone’s chasing Royal,” Kralik said. “We hope to be one of the teams who do it this year.”