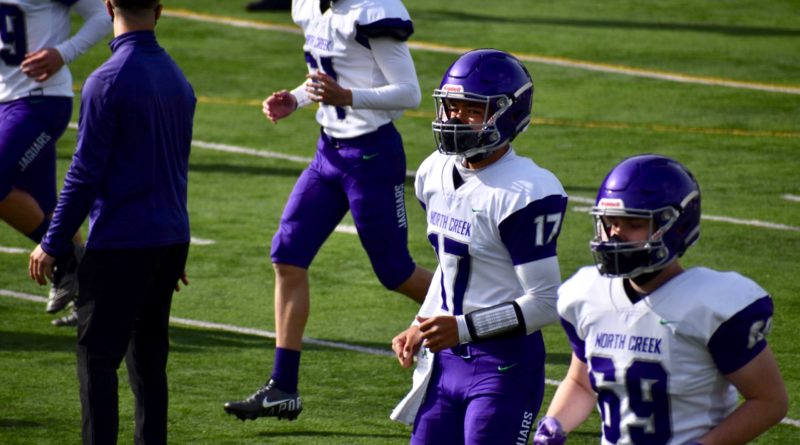 SBLive is previewing the Top 50 high school teams in Washington ahead of the fall 2021 season. Here’s an inside look at the North Creek Jaguars of the 4A KingCo – the No. 44 team in our countdown.

Koli Faaiu and Sam Lokeni are gone – and this is team’s lone offensive-line returner at left tackle. Basketball product is athletic.

Limited by a cast (broken wrist) during spring, he has really opened eyes this offseason as team’s most complete two-way player.

With each passing year, North Creek is looking more and more like a complete football program.

Coach Torrey Myers values physicality, and that has not only showed up in the league’s top rushing attack three years running, but the Jaguars are starting to stop people, too.

And now they come into the fall with a luxury few 4A KingCo contenders have – a returning starting quarterback in Kennedy McGill.

“It’s the first time we’ve had a senior quarterback starting, too,” Myers said.

One big assist goes to Jack Charlton, the former North Creek multi-year quarterback starter who is now at Sacramento State on a track scholarship.

Before the spring season, Myers went to Charlton about getting McGill under center – and moving the then-senior to another position (which could be the one he plays as a walk-on in college, too).

McGill showed plenty of poise and promise in his first year as the starter. He is an accurate passer. And he always delivers it to the right spot.

“I firmly believe in running the football,” Myers said. “But the differences between now and years past (throwing the football), we are going to be more efficient at it.

“We might not throw it more. We will just look better at doing it.”

Who will catch McGill passes? Rocco Traore will start at tailback, but move all over the formation, too (think USC’s Reggie Bush). Max Boden has reliable hands at wide receiver. And Stephen Woodward will be a big target inside the seams.