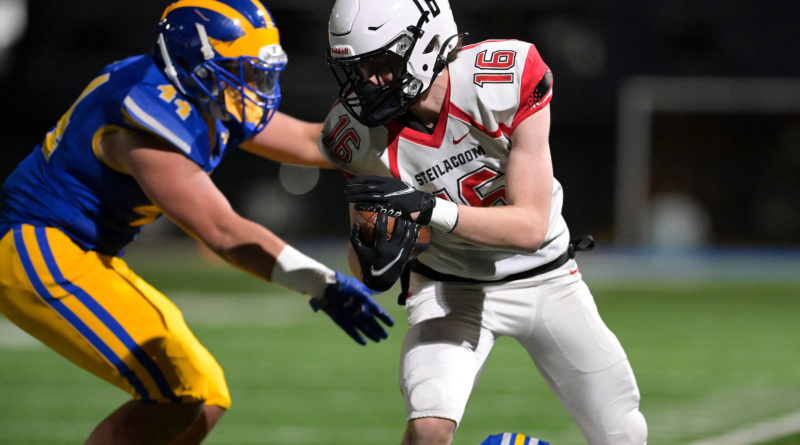 SBLive is previewing the Top 50 high school teams in Washington ahead of the fall 2021 season. Here’s an inside look at the Steilacoom Sentinels of the 2A SPSL – the No. 42 team in our countdown.

After featuring pass-heavy attack, Sentinels expected to dial it back this season, and feature this ultra-fast and shifty tailback.

Goes from No. 3 wide receiver to heavy-usage, all-purpose player that will still line up out wide, but play quarterback, too.

Co-2A SPSL defensive lineman of the year is a powerful run stopper who has better hands and feet than given credit for.

The past eight months has seen a revolving door of movement around the Steilacoom program.

And finally the late-developing transaction – coach Colby Davies resigned in July to take an assistant-coaching position at Portland State.

Kyle Haller got hired as the interim coach the week after Davies departed. It’s up to him to keep the ball rolling.

“Big picture, one positive is this senior group I coached in eighth grade at Pioneer Middle School.”

It also helps that Haller will remain the primary offensive play-caller, and has a feel on how to handle his personnel.

Cole Miller is the catalyst for everything. He becomes not only the top pass-catching option, the Sentinels also play on utilizing him as a dual threat under center. He could touch the ball plenty.

Caleb Crider, who sat out an injury-filled spring at Cascade Christian, will also see a lot of action at quarterback.

Steilacoom will likely lean on the run game, at least early on, with two dynamic tailbacks in Jaycion Cain and Deandre Napier.

“We are doing what we’ve been doing,” Haller said. “It’s worked – clearly.”