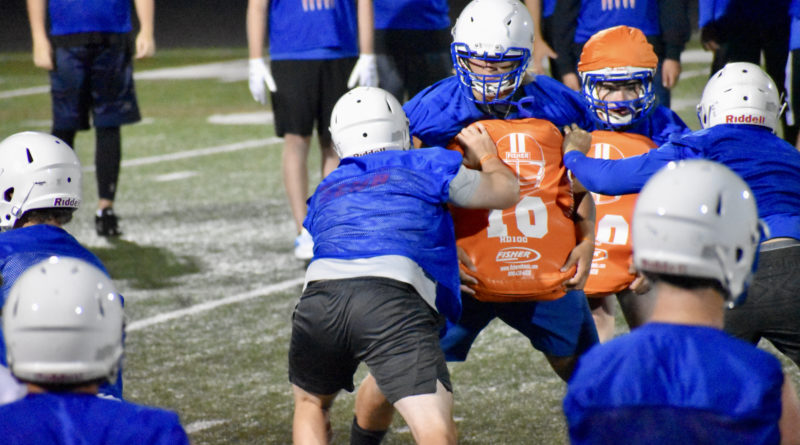 RIDGEFIELD, Wash.  — Messages pinged back and forth between Scott Rice and Ridgefield High School athletic director Brynan Shipley in the days leading up to Tuesday evening. The two were thinking of canvassing the home surrounding the school to give a proper heads up: Ridgefield football is back.

For the first time in two years, the Spudders planned to continue its midnight season kickoff practice, which has the team playing as soon allowed by the WIAA —12:01 a.m. Wednesday — on the official first day of fall football in Washington.

Since the team last did the event in 2019, several neighborhood have been built behind the school in quickly-growing Southwest Washington city, which saw its population more than double over the last decade.

On Tuesday night — err, Wednesday morning — the program was one of at least two (see Wahkiakum) across the state to carry a tradition that has popped up here and there among programs trying to drum up excitement for the start of the season by holding its first practice of the 2021-22 season, the first full fall season in two year, under the lights at midnight.

It’s the first full fall season in two years in Washington, which played a postponed and shortened 2020 season in spring 2021. And it will look a little more normal without a mask mandate for any fall sport.

“It’s fun to be like, ‘yo, we’re the only program right now in the state that’s working (including Wahkiakum) ,” Rice said. “Everybody else is asleep. Everybody else is waiting, and they’re patiently getting ready for tomorrow.”

As stadium hits blared over the loudspeakers, Rice couldn’t help take stock of the palpable momentum in the program coming off of a 4-1 spring season. It was all part of the plan, all along. Rice was hired in 2019 to turn around a struggling program, and he hoped to do so in lock step with the city’s rapid growth.

The event was started ahead of the 2018 season by then-interim coach Chris Abrams, who hoped it could be used to build excitement around a program coming off of a 1-8 season, its second consecutive losing season.

When Rice took over in 2019, he decided to keep it going — a decision made easier by constant inquiries from players, parents and even the school’s principal about whether or not the even would return.

Senior lineman Matt Kinswa took part in the Spudders’ first midnight kickoff practice in 2018. He was new to Ridgefield, having moved into town from Hermiston, Ore., and has been a part of the program’s steady improvement. It went from 3-5 his freshman year to 4-1 in the spring (and a near-league title).

Each midnight madness has given him and his teammates to measure their year over year success.

“It inspires me to think about how all the grades below me are going to act” to being a part of this, Kinswa said. “It’s a great experience to see the growth.”

Senior receiver Ty Snider, who at 6-foot-3, 180-pounds is one of the region’s top returning players, transferred to Ridgefield for the shortened junior season after King’s Way Christian (1A) put its high school football program on pause.

“Everyone coming out here, playing together, being a team,” Snider said, “I feel like it’s very important to start early building a culture and a brotherhood to hopefully go far in the playoffs and be strong as a team.”

The helmeted, padless practice offered Rice a perfect opportunity to sell the team’s mantra for the upcoming season: urgency.

Urgency to win a league title. Urgency to make a state playoff run. Urgency to start practicing before (most) everyone else.

Even if it means losing a little sleep.