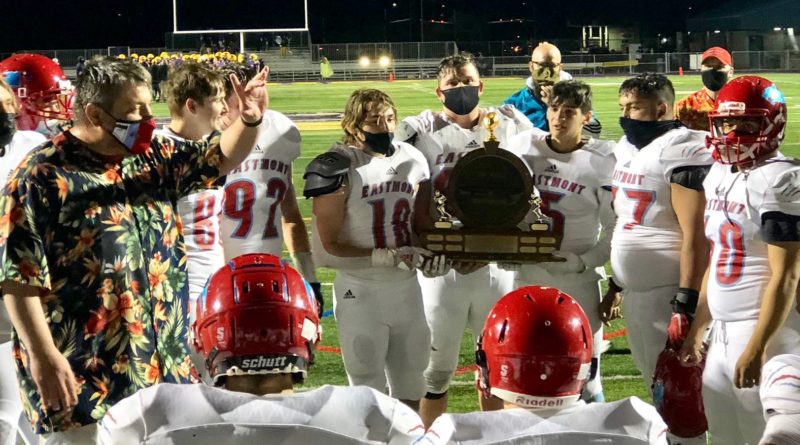 SBLive is previewing the Top 50 high school teams in Washington ahead of the fall 2021 season. Here’s an inside look at the Eastmont Wildcats of the 4A Columbia Basin/Big Nine – the No. 50 team in our countdown.

Dazzled last spring with his poise and passing arm as a ninth grader – he is the undisputed starter under center moving forward.

Wildcats like their bigger, stronger Wing-T blockers playing on the interior – and nobody is better than this fourth-year starter at left guard.

California transfer sat out the shortened season with a shoulder injury, but is expected the team’s most dynamic playmaker in the secondary.

People forget – Mike Don hailed from pass-happy offense as a player at Prosser High School, and coached a shotgun spread attack until early in his tenure at Eastmont.

“We were having a tough time finding quarterbacks and wide receivers,” Don said.

Well, one has come along – sophomore Luke Gale, who sat behind starter Ivan Corona in early spring-season action as a ninth grader before the coaches decided to see what kind of passer he was.

Gale impressed the coaching staff so much, he enters the fall season with the keys to the offense.

But what offense? Don said because the Wildcats also return a good run-blocking line, and all of their running backs, they will be in more of a double-wing formation (and present a four-wideout look) – just to make defenses choose what to honor.

“Luke gives us more of an opportunity to stretch the field,” Don said. “He is a really smart kid. He is even-keeled. But he also has a fearless mentality, and doesn’t let the moment get to him.”

Now returning to its normal 4A CBBN alignment, Eastmont comes in as the favorite – but could be tested by West Valley of Yakima, Sunnyside and, of course, close Chelan County rival Wenatchee (which it swept in two games last spring).

And if the Wildcats are going to make further noise in the postseason – they have not won a state playoff game since 1986 – they will need a strong senior class to show the way.

“We’ve got a lot of potential,” Don said.