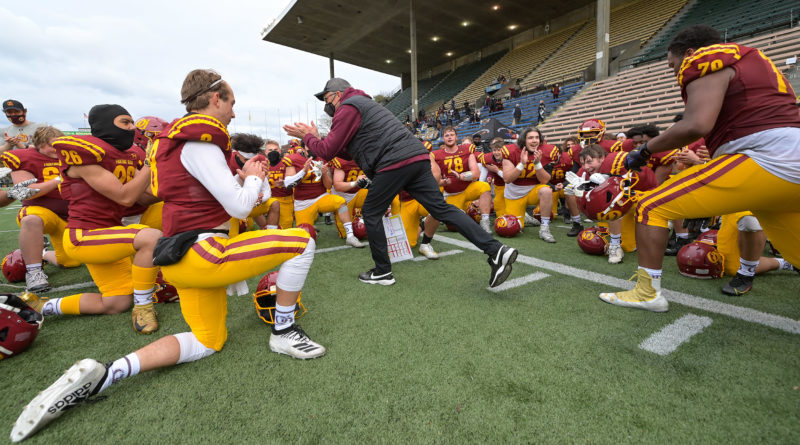 More than 20 months have passed since the last champion was crowned and Monte Kohler’s group at O’Dea, coming off of two consecutive runner-up finishes, is the team the rest of the state is chasing.

To help the Fighting Irish stay true to form, Monte Kohler’s group boasts the classification’s most imposing (and deepest) offensive and defensive lines – led by OT Mark Nabou (6-4, 330) and DT Asendre “Papa” Ahfua (6-5, 330). It is from those trenches that holes should be paved for, electric sophomore RB Jason Brown, SBLive’s underclassman of the year in the spring.

The Panthers left one of the loudest marks on the shortened spring season, collecting historic regular season wins over O’Dea and Eastside Catholic and finishing as the Metro League playoff runner-up. The uber-versatile Braeden Smith slides over to quarterback full time, where he can keep defenses off-balance with his feet and still dump it off to weapons such as TE Jack Velling (Oregon State commit) and RB Eli Black.

‘Sway’ channelled an underdog mentality and electric playmaking into a triumphant spring, winning the 3A PCL title. Now, the Sentinels have to defend it, and have the talent to do so, starting with reigning league MVP Jasiah Wagoner (WR/RB/DB), who returns alongside fellow dynamo Keekee McQueen (WR/DB), giving up-and-coming QB Dempsy James — who started as a sophomore last season — lots of ways to keep defenses on their heels.

Former UW lineman Michael Kneip has maintained a winning program since being hired at his alma mater at age 25. And that should continue in his fourth season in charge. The Wolverines’ returning cast is deep and talented, led by three-year starter Peter Netelenbos (C/DT) and OT Elliott Hamilton; sophomore TE Hogan Hansen (Arizona offer); a stout linebacking corps and electric playmaking CB Ishaan Daniels.

The Lions continue to hum in the Mid-Columbia Conference entering a third season of the Randy Affholter era – and should have the personnel to move the football. MCC co-lineman of the year Ayden Knapik returns, alongside OT Ashton Tripp and TE Bronson Childs – all of whom will help pave the way for all-state-caliber RB Myles Mayovsky, who helped lead the team to the 3A state semifinals in 2019, and returns healthy.

Talk about a program with some momentum, Yelm won its first league title last spring – all on the heels of its thrilling run in the state playoffs in 2019. The success should continue, led by hard-nosed, dynamic WR/DB Kyler Ronquillo (co-league MVP as a sophomore), who saw time at quarterback in the spring. LB Ray Wright paces an aggressive defense, and if the new cast of linemen jells as well as coach Jason Ronquillo hopes, watch out.

Spring presented growing pains for this young but absurdly-talented Abes’ group. Highly-touted dual threat QB Gabarri Johnson found his legs and flashed show-stopping moments by season’s end. And five-star DE Jayden Wayne gives Lincoln something no other team in Washington has – the state’s top 2023 recruit. If UW-bound TE/WR Chance Bogan is fully healthy, this is a squad that can compete for a program-first 3A state title.

The WIAA state championship gold ball has stayed in Sammamish for more than two years, but the Crusaders must turn the page from the J.T. Tuimoloau era quickly in order to keep it around. Returning a healthy Pac-12 target Dishawn Misa will round out a strong linebacking corps. But can new offensive coordinator Michael Bumpus, an ex-WSU standout, jump-start a unit that lost so many impact contributors?

The Wildcats will look different than the ground-and-pound team that reached the 3A quarterfinals in 2019 by virtue of record-breaking RB Kannon Katzer (now at WSU). They now boast depth out wide — lots of it — and a quarterback in Kellen Flanigan, an early-season spring addition, who not only can connect at will on the deep ball, he has enough mobility to make something out of nothing. Team needs young offensive line to grow up.

RB Dylan Carson burst onto the scene as a sophomore in 2019, and he followed it up with nearly 1,000 yards rushing (and 14 touchdowns) last spring. And with Nate Elwood, Caleb Potts and the rest of the offensive line back among 18 returning starters, Carson is in line to have another big season. Don’t sleep on the speedy 3A Wesco favorites.