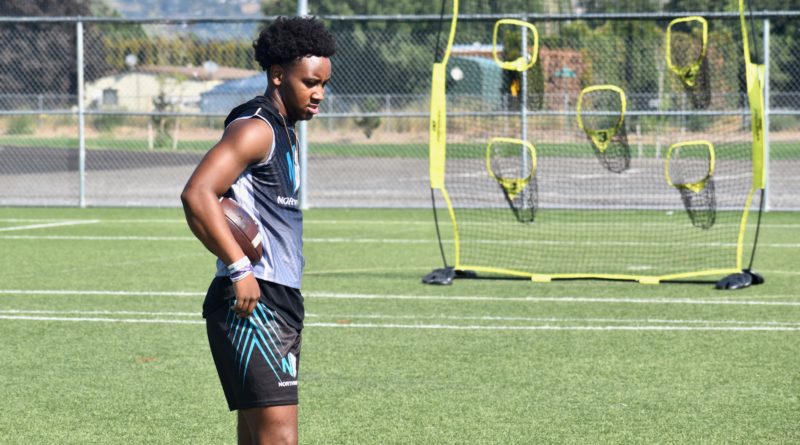 YAKIMA – Lincoln of Tacoma’s Gabarri Johnson is such a cool customer, he rarely looks up to see what others are doing in football.

Including at the most prestigious quarterback competition in the region – the Northwest 9 Showcase.

Coming in as the reigning “underclassmen” division winner from last fall, Johnson received the ultimate honor Sunday at the Sozo Sports Complex by being awarded the “Platinum Passer” – or overall most valuable player among the 65 quarterbacks in camp.

“He is so good, and your expectations of him are so high that you just look for things to try and find a flaw,” said Taylor Barton, the Northwest 9 founder and chief organizer of the camp. “And you can’t find it.”

In a competition that tests many measurables – strength, mobility, stamina, footwork, passing accuracy, arm strength and mental aptitude – Johnson constantly showed himself near the top.

That is likely why he is a top-10 quarterback nationally for the class of 2023, and holder of five Pacific-12 Conference offers.

“I felt like I did pretty good,” Johnson said. “I was No. 1 on the chart the whole weekend, and I feel like it’s all because of the work I’ve put in this summer.”

Did he feel like he had a target on his back?

“I didn’t really think about that too much, because it’s going to be there anyway in whatever you do,” Johnson said. “I just kept doing what I do, and didn’t worry about anybody else.”

Although the final top-nine rankings in each division won’t be released until Tuesday, it is safe to say Johnson will be a repeat winner in the underclassmen division.

The one that will be close is the senior division between the top two competitors after Saturday night – Graham-Kapowsin’s Joshua Wood and Tualatin (Ore.) standout Jackson Jones.

Wood has been balancing two sports this summer. He just got off a month-long tour in July on the Nike EYBL circuit with Rotary’s top basketball team, then spent the past two weeks preparing for the Northwest 9, working with trainer Jeffrey Solomon.

Considering 11 months ago, Wood was the unknown finalist who came out of nowhere to place fourth in the underclassmen division – his profile has changed dramatically in a year.

“I am getting better,” Wood said. “And I know I can be the best of the best, and one of the top (quarterbacks) in the Northwest.”

When asked which off-the-radar quarterback got his attention the most, Barton did not hesitate. “Reed Harris,” he said. “His life is going to change.” Harris was the first entrant ever from Montana, and the junior at Great Falls High School was the towering presence of the camp at 6-foot-4 and 190 pounds. Barton thinks he is a Power 5 athlete at the next level. … Other individual-testing winners Sunday included Jones (longest throw of 77 yards), Central Valley’s Luke Abshire (strongest arm at 57 mph) and Eastside Catholic’s Brady McKelheer (most accurate).