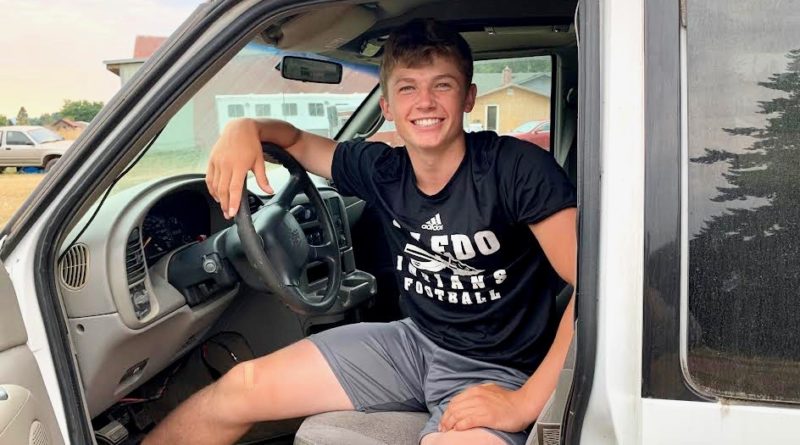 If you want a tip on how to win over your teammates as a first-year starting varsity quarterback, you might want to visit Wyatt Nef’s house in Toledo.

Better yet, he might just pick you up instead.

After Toledo High School lost 13 seniors off its team last spring, Nef became the new backfield leader as a senior.

But there is an ongoing issue going on at the Class 2B school, located in a rural town of approximately 1,000 residents in Lewis County: Awaiting new equipment, the weight room is unavailable.

“We’ve been at the middle school,” Toledo football coach Mike Christensen said. “A lot of kids are going elsewhere.”

That is where Nef enters the picture. Rather than watching teammates spread out and train on their own, the teenager decided to go looking for a multi-person vehicle to buy so he could drive them to state-of-the-art Thorbeckes Wellness Center in Centralia – some 25 miles north of town.

“I had the idea in the winter,” Nef said. “I was in PE … and I was telling friends, ‘We need to get the football team to the gym.’

“I have a five-passenger car, but one of my friends said I should get a bus. That wasn’t going to happen – I’d need to get a CDL (commercial driver’s license).

For months, Nef was on the lookout for a used van – at the right price. In June, he got his break.

School district officials had an idle white-colored 2000 Chevrolet Astro van that they were going to sell. A few staff members decided to purchase it as a gag gift for one of the retiring teachers at the high school.

“Four of us went to get it, but it had a dead battery,” Christensen said. “We put in a new one, drove it around for 10 minutes and it died again.”

The van went back to the district, which put it up in a surplus auction. Christensen contacted his new captain, and advised him to make an offer on it.

Nef – one of seven siblings who grew up in Rigby, Idaho – spent another $120 for an alternator, installed it and the van came roaring back to life.

Now, all he has to do is renew the vehicle’s tabs, and he is ready to meet teammates at the high school and start driving them to Thorbeckes to work out.

The only issue left unresolved is what to do about gas money. Rather than asking teammates to chip in, the senior-class president has an idea to hold a fundraiser to earn $1,000 for it.

And what does he plan to do with the van after he graduates next spring? Well, he has thought of that, too.

“One of my coaches might buy it from me,” he said.