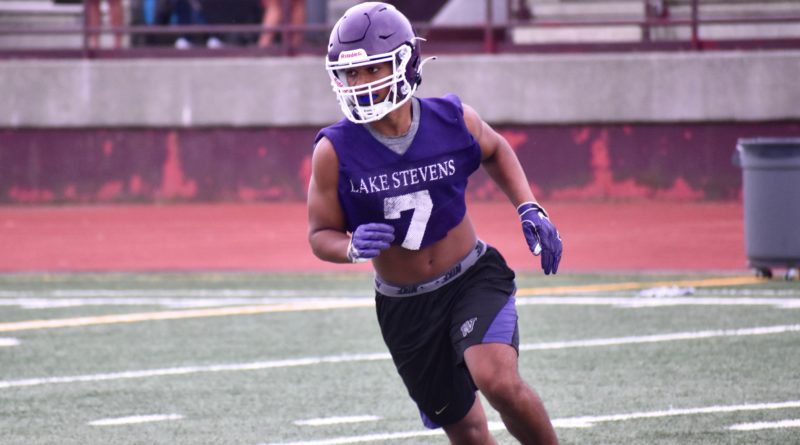 ARLINGTON – Maybe it will be a year of new trends for the Lake Stevens Vikings.

They got off to a good start Saturday by claiming their maiden Lakewood Cougars 7-on-7 Championship Passing Tournament title, defeating North Creek in the finals (28-21) to close out the summer football season.

Who knows what lies ahead for the Vikings, who have ruled the 4A Wesco the past decade. Could this be the year they win a Class 4A title, too?

They certainly flashed plenty of versatile offensive firepower against a talent-rich field, posting an unbeaten record in pool and bracket play at Lakewood High School.

“I am hoping that is the problem (for opposing defenses) for 14 or 15 more games,” Lake Stevens football coach Tom Tri said.

While confident and hopeful entering August, Tri also reveals a hint of remorse in his voice. It concerns his new starting quarterback – senior Grayson Murren.

Murren was magnificent all day long Saturday, tossing four touchdown passes in the finals, showcasing not only a big arm, but uncanny efficiency for a teenager who has never started a varsity game.

Therein lies the regret for Tri, who said Murren easily could have been a starter for a lot longer. He just happened to come around at a time when two-time 4A Wesco first-teamer and incoming University of San Diego quarterback Tanner Jellison was in the fold.

“He would have started at least two years … at 90 percent of the schools in the state,” Tri said. “But he is going to be a 1-year starter for us.”

But what a start he has gotten off to leading the backfield.

Also one of the school’s top basketball players, Murren is 6-foot-5. He can dunk off one foot. He runs just as well as he passes.

“It was kind of hard (to wait), but I also knew I could still get better, so I worked on myself,” Murren said. “And now it is my time.”

One thing is for certain – Murren will have no shortage of big-play targets to get the football to.

He has, of course, wide receiver Drew Carter, one of the better 2022 recruits in the state. He very well could lead the league in catches and touchdowns.

Then there is emerging Jayden Limar, who should not only carry the rushing load, but he is a great pass catcher as well out of the backfield. Limar has missed time this summer with a knee injury.

The team’s biggest breakout candidate is Trayce Hanks, who has video-game jukeability and should be a game changer on screen passes and sweeps. He was arguably the team’s most impressive player Saturday.

And don’t forget about tight end Isaac Redford (two touchdown catches in the finals) and Jayshon Limar, Jayden’s younger brother who also caught a score in the championship game.

Tri said he is going to do everything in his power to make sure Murren – named the passing tournament’s offensive player of the day – gets his career off to a fast start.

“I will be the first to say, I have done that kid a disservice (having him on the bench),” Tri said. “I feel like I owe him one. I am going to do everything I can to make sure that kid is seen, and have the opportunity to play on Saturdays.”

Meanwhile the Jaguars – who had plenty of ups and downs during pool play – fought their way to the finals by defeating Glacier Peak in the final four.

“Early on this morning, we were in some adverse situations, and our guys just played through it,” North Creek coach Torrey Myers said. “The way our guys we complete, and the resolve they play with is something … we haven’t had.”

All-4A KingCo defensive back Rocco Traoré, of North Creek, was named the defensive MVP of the day. He also caught a touchdown from Kennedy McGill in the championship game loss. … The host Cougars, who are viable Class 2A contenders, captured the “Linemen Challenge” title for the first time in school history. … Defending event champion Kennedy Catholic, which defeated Bothell in 2019 finals, saw its repeat bid end in a quarterfinal loss to Glacier Peak.