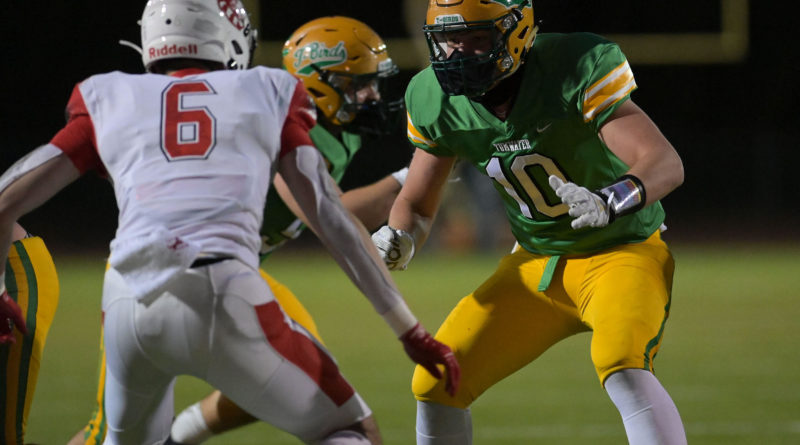 The T-Bird senior is a four-star prospect and the No. 4 overall rated 2022 recruit in the state of Washington, according to 247 Sports.

The 6-foot-6, 235 pound Otton made an impact as soon as he stepped onto Tumwater’s campus. At tight end and defensive end, he helped the T-Birds win a record-shattering 2A state title in 2019, his sophomore season, and followed it up with a 6-0 record in the pandemic-condensed spring 2021 season.

“Ryan really has his best football days coming soon,” Tumwater coach Bill Beattie said. “He’s still tying to get his legs underneath him, but oh my gosh can he be a stud.

“There’s just a ton of potential for him.”

Ryan Otton separates himself with elite blocking ability. What’s more impressive, Beattie said, is how technically sound he is for his frame, which still has even more to add. He also exhibits a deep understanding of the game, which can be attributed, in part, to growing up in one of the more accomplished football families in the state.

His grandfather, Sid Otton, and is the state’s all-time winningest coach (394-131) and led the T-Birds to five state titles. His father, Tim Otton, played for the school in the mid-1980s. His brother, Cade Otton, was the Associated Press 2A State Player of the Year in 2016 and a three-star prospect before going to UW.

“Can’t wait to watch you blaze your own path at UW,” Cade Otton said in a Tweet after the news broke. “Love you bud, GO DAWGS!”

During Beattie’s 22 years as the head coach at Olympia, he recalls seeing a young Ryan Otton running around the field as Tumwater’s ball boy under his grandfather when the two teams would play. As Ryan Otton’s coach, Beattie

“He’s learning to use that size as an advantage,” Beattie said. “The physical part of the game he has, he’s just starting to understand that. And that’s what I think makes him most scary, when he understands what he’s able to do.”

He held offers from eight other Pac-12 schools. Washington offered in April 2020.