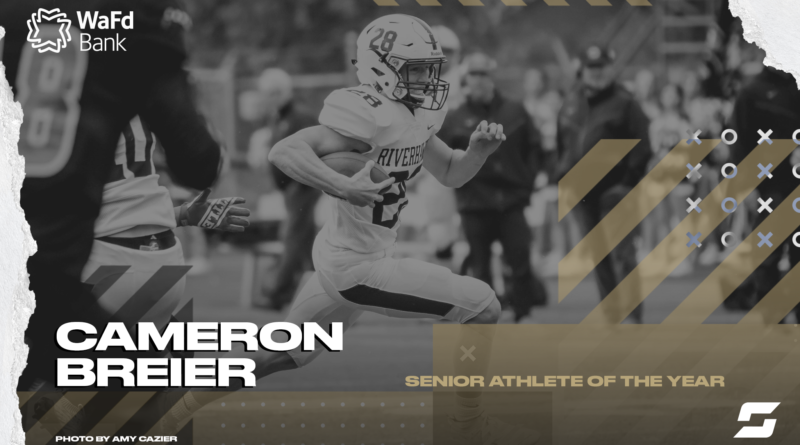 In 2018, as Cameron Breier stood on the Star Track podium with his fellow newly-minted 4×400 meter state champion teammates, something clicked.

He’d just finished the anchor leg of Chiawana’s 4×400 relay victory, and as he crossed the finish line, looked both ways and saw he was first, he felt a sense of assuredness.

“I learned, luckily, my freshman year, that age isn’t something that’s going to ever be able to hold me back,” Breier said.

For many athletes that moment would have been a pinnacle achievement. For Breier, it was only the beginning.

In the following three years, Breier, SBLive’s 2020-21 4A Senior Athlete of the Year, went on to rack up a long list of awards, including a state track title, nine varsity letters, seven all-league selections, a state title and an all-state selection.

“Cameron is one of the best high school kids you will meet in your lifetime,” Chiawana athletic director John Cazier said. “Truly unique and special. He has meant so much to our school and (programs).”

Breier was one of 10 students across Central Washington to be nominated to attend Air Force Academy by Rep. Dan Newhouse, where he’ll play football and run track. He is already in Colorado Springs, Colo. going through basic training.

Breier grew up in a military household and knew from a young age — around fourth or fifth grade, he says — that he wanted to go to Air Force Academy. His father, Michael Breier, served in the Navy, and Breier was always drawn to the military environment, and the people he knew who served.

But being sea-bound didn’t suit Breier. Instead, he decided to take after his grandfather, who was a pilot, and choose the Air Force. Though he admittedly didn’t enjoy his first experience flying with his grandfather, Breier quickly found a passion for the skies the more he learned about it.

On his 17th birthday, he secured his pilot license on the first day he was eligible, completing his private pilot check ride and instrument rating check ride at the same time.

“The sense of limitlessness, being unrestrained and open to the air,” Breier said. “I just love how you have the opportunity to go anywhere, you don’t have to follow the road. And it’s beautiful up there. It’s a new perspective on the world.”

And playing two sports at a Division I college? That wasn’t even a part of his dream.

In the end, both came true — a byproduct of his hard work and athletic achievements in high school.

“When you’re a little kid, you’re thinking, everyone’s goal as a little kid is to go play in the NFL, but mine never was,” Breier said. “It was always just to go to the Air Force Academy.”

Senior-year highlights: Football: Helped Riverhawks to a 6-0 record while battling foot injury … named second team all-MCC linebacker.  Swimming: went out for swimming for the first time three weeks into the season, went on to qualify for the district meet. Track and field: First team all-MCC track and field selection in the 300-meter hurdles (39:01), 4×400 relay (3:27.26), honorable mention selection in 110 hurdles (14.98). Finished first in the 300 hurdles with a personal best 38:54, second in the 110 hurdles and first in the 4×400 relay at the MCC Track and Field Championships.

Career accomplishments: In total, he garnered nine varsity letters, seven all-MCC honors, an all-state selection and a state championship … won a 4A state title in track as a freshman, nabbing a four-way tie for first as a team in 2018 as well as winning the 4×400 … first team all-MCC linebacker as a sophomore and junior — leading the Riverhawks to WIAA 4A state playoff berths both years … SBLive’s second team all-state linebacker and one of SBLive’s Top 30 linebackers in Washington in 2021.