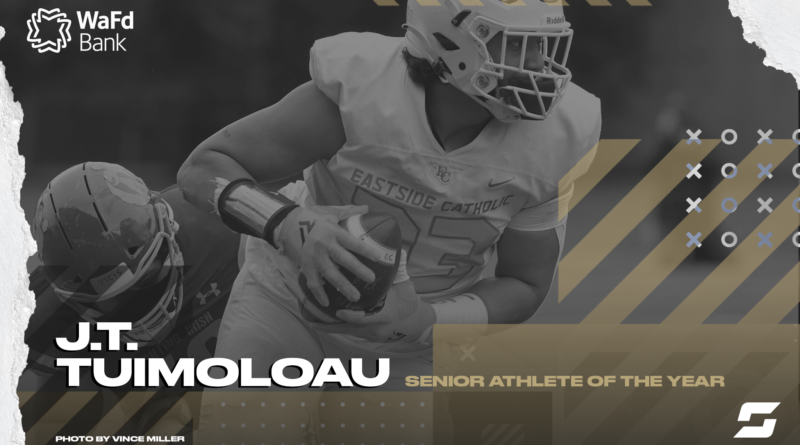 But to those around him, what really separates the 5-star defensive lineman, who 247 Sports regards as the country’s top recruit, is his character.

Just ask Tuimoloau’s football and basketball coaches at Eastside Catholic, who have seen the way he carries himself up close for the past four years.

Added Crusaders football coach Dominic Daste: “He loves (his teammates). He loves the program. He loves football. I couldn’t ask for a better kid.”

One of Merritt’s methods to motivate his players is to talk smack, evenly distributed, in an effort to let them know that no matter the level of skill, he plays no favorites.

“It’s hard to talk bad about JT, because he answers the bell every year,” Merritt said.

At 6-foot-5, 280 pounds, Tuimoloau possesses an atypical combination of a mean edge and a fleet-footedness and dexterity that makes him a nightmare to defend at the high school level — both as an edge rusher on the football field and a versatile forward on the hardwood.

He famously reeled in the game-winning touchdown with one hand in the 3A state football title game in 2019 — to secure back-to-back championships — then turned around and dominated the likes of Jefferson (Ore.) and Bishop Gorman (Nev.) in the nationally-competitive Portland-based Les Schwab Invitational not long after, having not yet played his way into basketball shape.

When the Crusaders football team played in a consolation Metro League playoff game, Tuimoloau, battling a severely bruised and swollen calf, begged and pleaded his mom  — and doctors — to let him suit up.

Even though he didn’t, he was often times the most animated one on the sidelines.

Tuimoloau is uniquely loyal to those close to him, whether it’s his family, friends, classmates or even teammates at Eastside Catholic.

“Coming into my freshman year, I didn’t know where I was going to play,” Tuimoloau said. “Being part of the (Eastside Catholic) family – this foundation – I wouldn’t choose anybody else than right here. It’s been a great four years – also a quick four years – and all I can say is I am blessed to be a part of this program.”