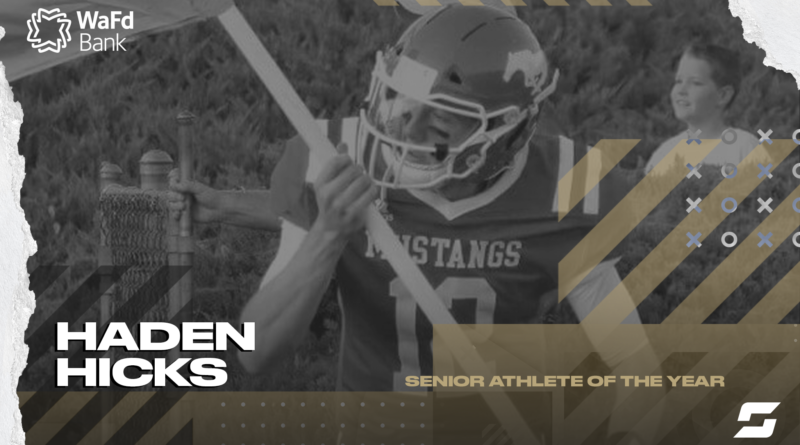 As a sophomore, Prosser’s three-sport standout suffered three fractured vertebrae when he was hit and knocked unconscious during a football game. He decided to retire from football, though that didn’t last long, and he returned for the next two seasons — suffering a season-ending broken collarbone the very next year.

When it came time to decide on his post-high school future, those experiences fueled his desire to jump-start his desired career path as a firefighter/Emergency Medical Technician — one that will require his unique athletic ability that allowed him to be so prolific on the gridiron and the hardwood at Prosser over the past four years.

“It really made me believe it can be stripped from you at any point in time, whether it’s sports or a career,” Hicks said.

Hicks, who has ascended to statewide prominence in basketball, football and track and field, won’t pursue college athletics. Instead, he’s been accepted and already entered into a fire rescue residency program, where he hopes to train to be a firefighter paramedic.

He’ll draw on the characteristics, both physical and mental, that helped make him into a great high school athlete — and SBLive’s 2A Senior Athlete of the Year.

There were days when Hicks questioned whether or not he would play football again in high school — a question that for awhile, he and his family had a tough time answering.

Those instances drew him closer to his faith – symbolized by a cross tattooed on his right rib cage – and brought him purpose.

They also pushed him to put career aspirations first and sports second after high school.

Hicks has been described as somewhat of a coach’s dream. Much of the deliberation on his athletic future couldn’t be detected from his on-court play, or how he carried himself as a player, a teammate and a leader.

“He’s just kind of quiet, comes in, does his thing, and he’s a great leader that way,” said Prosser boys basketball coach Toby Cox, who was hired Hicks’ freshman year.

At Prosser, his legacy of high-flying dunks will live on. When Hicks got the ball on a fast break, or had a clear path to the basket, Cox said players and fans rose quickly out of their seats in anticipation.

Hicks’ ability to play so consistently above the rim is something Cox hasn’t seen much in the 2A Central Washington Athletic Conference.

“Stuff like that you don’t see at our high school, so it’s a huge thing, and it gets the crowd and his teammates going,” Cox said.

Career accomplishments: Football: Named a first team all-2A CWAC receiver as a senior … helped the Mustangs to a 4-1 record in the condensed spring season as prolific passing QB Kaiden Rivera’s No. 1 option, outscoring opponents 193-52 (in five games) … played quarterback, wide receiver and defense throughout the course of his four years … was named among the 30 best receivers in the spring 2021 season by SBLive. Basketball: Started as a freshman, averaging 13.6 points, 8.7 rebounds and 2.3 assists per game … Three-time first team all-2A CWAC selection. Led the Mustangs to the 2A state tournament in 2020 … leaves Prosser as the school’s career leading scorer with 1,429 points … high-flying dunks made him a must-watch player. Track and field: After playing varsity golf as a freshman, he switched to track and broke Prosser’s high jump record of 6-6 1/4 as a sophomore … Qualified for 2A state meet as a sophomore and placed fourth with a 6-4 jump … entered the 2020 track season (canceled due to COVID) with the second highest high jump mark in the state (6-6 1/2) across all classifications.